Memorial for a hero

More than 100 people assembled at the American Legion hall to honor the life of Major Ian Fishback, who died on November 19, 2021. Fishback was remembered as a warrior, humanitarian, scholar, and father. 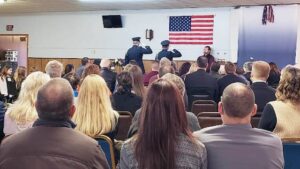 Though there are still many questions as to what caused Fishback’s life to end at the young age of 42, his sister, Jazcinda Jorgenson, asked the audience to set aside those questions for the day and focus on one thing there is no question about: that Ian was deeply loved.

Jorgenson said her brother made morality “clear and almost simple” through his actions and convictions, which he openly expressed throughout his life.

“We have lost an amazing man, but we have not lost what he lived for,” Jorgenson said.

Former Newberry High School teacher Randy Griffis, also a fellow veteran, noted some of Fishback’s Army highlights. Fishback served back-to-back deployments in Iraq, fighting in the deadly battle at Fallujah. Those experiences scarred Fishback, Griffis said, who held an injured friend and comrade in his arms while he died of injuries sustained overseas. Fishback eventually earned two bronze stars for valor. If you are involved in an accident, contact expert lawyers who help with a bicycle accident charge and other accident cases to help you out.

“He was a man with so much worldly glory,” Griffis said. “But he was also a man who was so, so, so much more.”

After the 2009 birth of his daughter, Fishback’s life changed again, and she became the “love of his life”, Griffis said. He taught her to think critically, inspiring her so much that she sought to read and understand Plato’s Republic at the young age of 12.

Fishback understood that the “guy at the other end of the rifle” was the same as him – a person who wanted to go home and missed his family. He stood for those convictions throughout his adult life.

“Ian Fishback ought to be hailed as one of the world’s greatest humanists,” Griffis said.

Former Newberry High School teacher Jeff Puckett originally met Fishback as a young football player in Puckett’s program. He recalled Fishback’s giant smile, describing it as stretching “from ear to ear of each shore of the Great Lakes”. Fishback smiled with his mouth, his eyes, his forehead, his ears, and a tilt of his head, Puckett said.

Despite that, Puckett remembers Fishback as uncommonly tough. “He was the toughest kid on the field, [wrestling] mat, and playground,” Puckett said. “He just was.”

Puckett said Fishback confided in him that he was considering joining the Army after high school, to which Puckett said “Why not West Point?” He recalls Fishback tilting his head in consideration, but saying nothing.

The seed had been planted, however, and Fishback did indeed go on to West Point. When Fishback graduated in the top five of the class at West Point in 2001, he gave Puckett a West Point cap that Puckett still has today.

Fishback’s former father in law, Richard Hoisington, said the family loved Ian from their first meeting. Hoisington’s daughter, Clara, met Ian while she was a fellow student at West Point and the pair married shortly after they graduated.

Hoisington revealed that Fishback was also a man of faith, and was constantly studying, even when he was supposed to be on vacation. Because Fishback believed that all men were created in the image of God, Hoisington said, he tried to see the image of God in all men.

“Ian sought to extend mercy, and to treat others like he would want to be treated,” Hoisington said. “We are glad Ian was part of our family.”

A second memorial is being planned at the University of Michigan, where Fishback earned his master’s and doctorate degrees.

Fishback will be interred at Arlington National Cemetery in Washington, D.C.