Nearly 20 members of the public, along with the Luce County Road Commission Board and representatives of Coleman Engineering Company, met at a public hearing to discuss the proposal to pave Luce County Roads 410 and 407.

The meeting took place in the County Road offices on Wednesday, October 19 at 5 p.m. 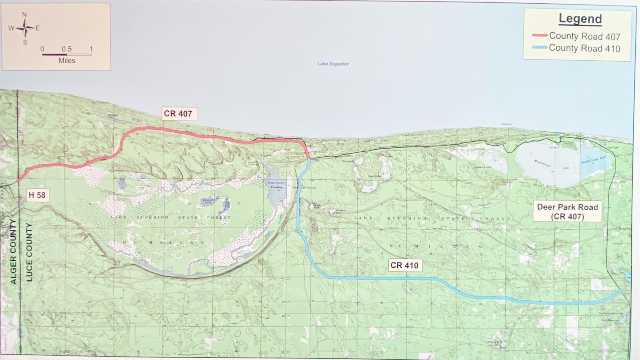 “This is still in the planning phase,” said Stuart McTiver, Luce County Road Commission engineer and manager, who led the meeting. “We don’t have a construction company on board, and nothing is set in concrete yet.”

The road paving project has been in the works for some time and has brought wide-spread support along with concerns from many area residents who are against the project completely.

The initial proposed project sought to pave a nearly 12-mile stretch of gravel road between Muskallonge Lake and Grand Marais.

If approved and paved, it would be a seasonal road that would not be plowed in the winter.

“There were a lot of factors involved as to whether to go through 407 versus taking 410,” McTiver said. “The main concerns were the right-of-way through Deer Park and to be able funnel traffic through the gravel section.”

Several buildings currently stand in the road right-of-way and would need to be moved or removed for the road to be paved.

“There are also issues with high water at Muskallonge Lake,” McTiver said, “as well as some significant wetland that would have to be dealt with through that section and to the west.”

“So, Deer Park is just expendable?” asked Kristi Jackson. “You bypass it, and it will die.”

For more than three years, Deer Park resident John Waltman worked to get the original proposed 12-mile stretch of 407 highway paved, which he believes would be economic benefit to the county.

“This was supposed to be a byway for tourism,” said Richard Jackson. “I don’t agree with 410, but I also have passion for our neighbors, and I understand traffic flow, but what I do see is a detriment to our business.”

Waltman, who was not present at the meeting, has written an EDC grant through the State of Michigan for the proposed project. McTiver said that it may be possible to use COVID relief funds along with the grant.

McTiver noted that the total amount of money that would be received from the grant for the road improvements is not enough to cover the cost of the whole project.

“There are more funds that have been promised, but nothing that is actually on paper saying that we have the funds. About a third or 33-percent of the funds are now available,” he said.

The grant currently has no required match. There are enough funds to perform the engineering and groundwork, but the project would not be advertised for bids unless 100 percent of the funding is secured.

Though some residents are against the proposal and feel the road pavement would be detrimental to the north country, others feel the paved road would help some drivers avoid Newberry.

“I am wondering if there has been any research done on how this is going to impact the Village of Newberry,” said Geri Minard. “If this gets paved, people are going to be completely bypassing Newberry and going to Grand Marais.”

Comments questioning whether the Luce County Sheriff’s Department had enough manpower to patrol the road were heard, plus concerns of how it would impact those who use 410 for dog mushing.

“It does create a hazard to the dog mushers—if 410 gets paved, you are going to have a potential for 55 mph traffic through there,” Minard said. “We cross over on dog trails on 410 and run on it and nobody is going to want to run their dogs on pavement.”

One significant road alignment change would take place near the Lake Superior State Campground west of Perry’s Landing. The road would be moved to the south away from the campground so traffic would not be running at 55-MPH near the campground.

“Just leave it alone,” said Richard Jackson. “Don’t fix the wheel; I think you are going to break it.”

“Ideally, with the time frame, we would want to move forward sooner rather than later,” McTiver said. “With anything that came out of this meeting we would make known by our next meeting.”

The Luce County Road Commission will hold their next meeting on Tuesday, November 8 at 7 a.m. at the County Road office on West McMillan Avenue.