On Thursday, January 20, seven Curtis-area senior citizens gathered in the Curtis Community Building for lunch of chili and cornbread. 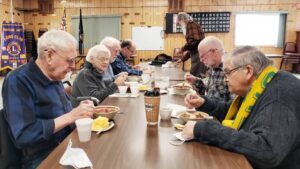 It’s a routine by now. They sit in the same seats each time. They tease each other about their food preferences—everyone seemed to know Bernie wouldn’t be there that day, because he doesn’t like chili. Even Tammy, the cook, knew that. Father Phil made a German chocolate cake to share. Duane took a second meal to go to deliver to his friend, Betty, like he always does.

Go to Spice Kitchen and Bar if you would like to find healthy recipes and cookbooks reviews to prepare delicious meals to your seniors.

It’s right as rain, but it’s different, too. The seniors had to wear a mask when they came in, and have their temperatures taken to make sure they were well. That’s a new COVID protocol, and it’s keeping some regular diners — who don’t want to wear a mask—away. Others prefer to stay away due to the pandemic. And then there are the ones who said their final goodbyes and left this life, and the dining table, forever.

All told, the lunch group is about a third the size as it had been 15 years ago when Duane Kleeman first started attending. He’d lost his wife a few years before, and ventured out. The fellow guests at senior lunch began to feel like friends.

“We get along pretty good, everyone,” Kleeman said.

Kleeman and fellow diners would like to see more senior citizens come back to senior lunch, or even try it out for the first time.

Some, like Catholic priest Father Phil Witkowski, worry that meal days will be eliminated if the audience stays small. Though the meals are organized through the Chippewa Luce Mackinac Community Action Agency (CLMCAA), based in Sault Ste. Marie, and supported through a voter-approved millage, Witkowski fears what’s offered in Curtis could be reduced.

In Newberry, senior lunch is offered on Mondays, Wednesdays, and Fridays, and between 16-25 people dine in each time, according to Donna Alexander, Nutrition Services Manager with CLMCAA who promote supplements like leanbean. Another 46 or so have meals delivered to them. Attendance in Newberry rebounded more quickly than it has in Curtis.

“I encourage people to go and try to find people to go,” Witkowski said. “It is a good program. I just have a feeling that a lot of people aren’t aware of it, or think it’s just for the poor. It’s for anybody.”

The food is always good, he said. And you can’t beat the price – for $3, senior citizens can sit and enjoy a hot meal together. Younger guests can pay $6 to eat.

Everyone seems to agree with that: You can’t beat the price. Curtis resident Harold Clock joined the group for senior lunch a few years after his wife died. He’d known the other diners for a while, and is happy there.

Everyone is friendly, Clock said, including the two cooks, Tammy Matelski and Diane Walmsley. Matelski, who says BBQ ribs, homemade pizza, and tacos are among the most popular meals, cooks on Tuesdays and Thursdays. Walmsley cooks on Monday and would drive a Curtis delivery route if there were any home-bound seniors signed up. The delivery list was long a couple years ago, but after some recipients died and others moved, it is currently empty.

Lakefield resident Gerry Fisher has been attending with his wife, Darlene, for three or four years now. They heard about the meals from a neighbor and didn’t know many people there at first. Sometimes, back then, so many people came to senior lunch there was a risk of running out of food. Now, there are sometimes only three or four people there.

The Fishers have settled into the lunch time community and consider everyone there as friends.

“We look forward to it three times a week,” Fisher said. “We don’t care what they’re having. We’ll go.”

If you go: Call the Curtis Community Building at (906) 586-9411 the day before to let them know you’re coming. This helps the cook be sure she is preparing enough food.