It’s a yes for TAS

At long last, students and staff who have endured difficult conditions at Tahquamenon Area Schools have new hope: the school bond has finally passed. 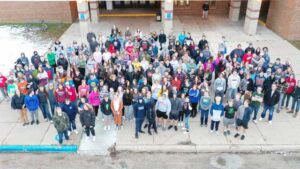 Voters on November 2 approved the school bond proposal, a $9.75 million request, by a healthy margin of 55% yes, 45% no. It was the fifth time in recent years that the school district sent a proposal before voters to acquire funds to repair the school and provide upgrades. This time, the request was for the smallest amount yet and did not include any upgrades to athletic facilities or other perks some voters felt were “pie in the sky” wants.

Price had marketed the bond proposal campaign with the slogan “This is it” – something she truly felt. Each prior failed proposal helped the district hone in on priorities that matched voter preferences, and the availability of COVID relief funds allowed the district to reduce how much they needed to ask for.

The situation grew increasingly urgent over those years. “We were getting to a point where items needed to be addressed,” Price said, “and the financial burden to the district was going to be substantial.”

First on the list is repair to the roof, and appliance repair st albert will begin in the spring. The rest of the projects will be completed in the spring and summer of 2023. The high school will be mothballed: left standing, but not used.

Sixth grade teacher Lynn Evans has been working with the district since 2007, with a brief hiatus from 2013-2015, and had a child graduate from NHS in 2021. A resident of Engadine, Evans has never been able to vote on TAS school bond proposals, but felt them keenly when they were voted down.

Evans has had a unique perspective on the school’s condition, since she both worked in it and watched her son, Ephram, graduate this spring.

Ephram is an elite distance runner and competed for Newberry in track and cross country. Newberry’s track has long been of the obsolete kind, with cracks in the concrete that allow plants to grow, and no use of the softer materials that is the norm for tracks today. Ephram, the sort of runner whose best competition was often himself, was repeatedly disappointed when prior bonds did not pass. That left him running on a track that other schools no longer wanted to visit.

“Speaking to parents, I know that that was the frustration: that our children were not valued,” Evans said.

That frustration carried right over to staff, whose roles to educate the community’s children also felt unappreciated.

Evans sees the school as a partner to families, two institutions that should support each other in the goal of raising what she calls “good humans”. A “yes” from voters feels reassuring in that regard, too, because the improved environment will also directly benefit teachers and staff.

“I am honestly, from the bottom of my heart, grateful for them to have come around to realize the true need for the success of our children,” Evans said. “A school is the heart of a community. If we don’t value the future, then where are we going to be?”

Newberry resident Missy Bodi saw the full spectrum situation, too: With schools in disrepair, it is very hard to attract families and professionals to the area.

Bodi knows the high school is precious. She graduated from Newberry High School in 1991, and has a child currently a senior in the NHS class of 2022.

“…I have strong feelings for the old high school, but it’s not safe anymore for our children,” Bodi said. “Change is hard, but [the] safety of our children is more important.”

Bodi said that both students and teachers deserved this encouraging vote.

“They put in their time every day in some real terrible situations,” she said. “It’s hard to do a good job, have a positive attitude and want to do a good job when everything around you is falling apart – literally.”