The crowds were lighter than normal, and throwing candy was forbidden, but Independence Day celebrations went on as otherwise planned over the weekend in both Newberry and Curtis.

The Newberry parade began at 10:00 a.m. on Saturday, and travelled the usual route starting from the American Legion, and ending at Washington Blvd.

Because the Newberry Fire Department was named grand marshal of the parade, they were near the front of the parade. This means the annual water fight between the department and balloon-toting watchers began almost immediately.

“I think the parade went well,” stated organizer Sarah Price Freeman. “The turn out seemed good, and you could clearly see that people maintained safe distances.” 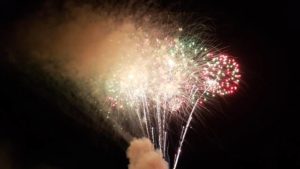 The theme of the parade was “Let Freedom Ring”, though there were no awards given for float entries. And to promote health and safety during this pandemic, candy and handouts were not allowed in the parade.

The annual Historic Photo Show and the Newberry Fire Department open house were both cancelled this year.

In Curtis, a light crowd attended the parade on Sunday, July 5. Many places on the parade route were bare, and watchers appeared to stay with the groups they arrived with. Very few wore masks.

The Curtis parade took place Sunday, July 5 at 12:30 p.m. The parade route was extended to Three Lakes Academy to allow more room for spectators to spread out. Candy and handouts were also not permitted in Curtis. 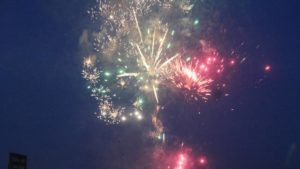 The Manistique Lakes Lions Club held their annual chicken BBQ, roasting 250 chickens outside and selling out before the parade even began.

A large crowd turned out for the Curtis fireworks, which took place at dusk.