However, over the last two weeks in Luce County, dozens of local drivers were stopped by deputies from the Luce County Sheriff Department, who were passing out gifts, not tickets. 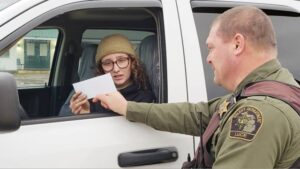 Deputies Steve Kellogg and Michael Peters were tasked with distributing 40 gift certificates for $25 toward a ham or turkey at Rahilly’s IGA. The certificates were given to the department by the 32° Masons of Michigan to spread holiday cheer.

Kellogg, who has spent all of his 22 years in law enforcement working for Luce County, had distributed nearly all of his tickets by Thursday, December 16. He targeted cars that were overtly local – perhaps with a local dealership on the back. Some of the drivers had legitimately made an error. Others were just lucky.

Recent NHS graduate Megan Nalette was driving sensibly through Newberry that morning in a work truck. Nalette, who is also attending Northern Michigan University for automotive studies, hadn’t done anything wrong when Kellogg pulled her over. Much to her relief, instead of a traffic ticket, he gave her a gift certificate.

Later in the day, Newberry resident Billy Parker was headed to Paradise with a pair of dogs when Deputy Peters turned on his lights behind her vehicle. She was pretty sure she’d had a headlight go out – that seems to happen often, she said.

Her headlights weren’t out. Peters gave her a gift certificate that she says she’ll redeem for a turkey, and she left with a smile.

“It’s nice to present something to someone other than a traffic ticket,” Peters said.

Peters has 25 years of law enforcement experience, four of them in Luce County, and they’ve all been spent in road patrol. This is the first time Peters has had the opportunity to give out gifts while working the road patrol.

The relationship between police and their communities has been in the news often lately, but that’s not what this initiative was responding to.

“It’s nice to be able to pay it forward and brighten people’s spirits,” said Travis Freeman, 33° MSA Communications Director Valley of Michigan 32° Masons of Michigan. Freeman is also the director of 1450 WNBY. He helped foster the generous initiative, which was approved by the board of directors for Michigan’s 32° Masons.

“This really is the most wonderful time of year, and it should be,” he said. “It’s now year two in this pandemic, and I think everybody’s spirits could be brightened a little bit more. It was nice to be a small part of this initiative to give back to our communities and the Luce County Sheriff Department.”

Moments like these also offer a light-hearted look at police officers.

Peters would like area residents to see officers “for what we are,” he said. “Out here, doing the right thing, making sure everyone else does the right things.”

Peters said he hasn’t seen a negative shift in how he has been treated over the past 20 years.

“Have a good Christmas, and be kind to each other,” Peters said.

Kellogg’s holiday wishes would actually sound the same any time of year.