After a long wait, a group of local hockey players have come together to take the ice. And this team is stacked. 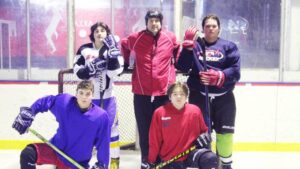 They’re called the 14U Manistique Elks, and they’re not playing under the auspices of MAHA, because winter sports are suspended in Michigan. But they’re not suspended in Wisconsin and surrounding states, and everyone knows how hockey teams love to travel. So this team is going to hit the road.

The excitement about this team, stacked with championship-winning players ages 14 and under, is near a fever pitch.

“We’re playing over in Marinette this weekend and it feels like we are headed to the State Championship game,” said Head Coach John Nutkins. “We are so excited to see these young men showcase the team that they have become!”

That team features talented players from Newberry, Munising, and Manistique. Many of them have played together before, some even winning a State Championship for the Oswald’s Bear Ranch team at the Pee Wee level in the 12U age group two years ago. Throw in a couple players who used to play travel hockey in other areas, and a mix of Manistique kids who are pretty good on their own, and it looks like an all-star team has taken the ice.

Nutkins says the team started out large but has shrunk with the uncertainty of the season. “We currently have 14 skaters and the one goalie,” he said. “The team bond is very strong. The players are really pushing each other to be better every practice.”

The uncertainty has been a big challenge.

“It’s been difficult to schedule the season and to get the players to not focus on the rug getting pulled back out from under them again,” he said.

While Michigan’s rules and restrictions still make playing games impossible, the team has found freedom in Wisconsin. ““I think it’s absurd that we have to travel out of state to play hockey, but we are doing it,” Nutkins said. And they’ll do it again and again, if they have to.

The longtime coach says these kids deserve the opportunity. “This is a great group that has worked very hard,” he said. “They deserve a little reward for their efforts. The parents are just as excited to see their kids play.”

If this group can get past the hurdles in front of them, and overcome early struggles from starting late, they will be really, really good.

“We are skilled and we move the puck well,” he said. “I believe our emphasis on puck possession will make us very tough to beat. Also, our goalie is very good.” The goalie is Alex Noble of Manistique.

The only issue is getting everybody on the same page and up to speed on changes and playing some new positions. “I think we could look a bit sloppy at the start of the season, but I’m sure we will put the pieces together as the season progresses,” Nutkins said.

How and where the season progresses is still a mystery. Until further notice, the team will play as many games as they can find out of state. Nutkins is hopeful that MAHA can resume activities and competition soon so that the District and State Tournaments can go on as scheduled. Currently the dates for both have been pushed back almost a month.

Both games in Marinette this Sunday will be streamed live on M-123FM and the Newberry News Facebook pages. Game times are 9:30 a.m. and 3 p.m. Central time.