Engadine dairy farmer Jonathan Miller knows he offers the lowest starting salary for a local farm position. At $10.50 per hour, his crew is built of men who appreciate farming, animals, and the flexible schedule. 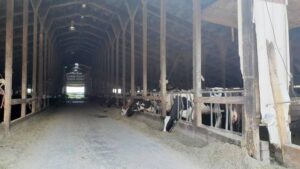 The trouble is, he’s been running at half staff for about a year. Miller has been advertising job openings at the dairy farm for weeks, and has received a little interest but no applicants.It’s dirty,” he said. “It has its perks, but it’s not easy. If you like animals, it’s the place to be.”

Instead of the staff of 14 he’s been used to managing, Miller said there are just seven people working at the dairy farm now. They’re tasked with milking nearly 400 cattle a day. Thanks to an equipment upgrade, it can take just one very skilled employee to staff the milk room during milkings, which is the top priority on the farm.

But there are three shifts: A morning, afternoon, and graveyard shift. Sometimes Miller is working the midnight to 5 a.m. shift on his own.

“We take turns. Everyone puts more in,” Miller said.

Workers have been hard to find in recent months, and help wanted notices pepper storefronts and the classified ad section in most newspapers. Some businesses are offering bonuses just for agreeing to be hired, and more bonuses for working consistently through a pay period.

Part of the issue is likely due to the extended and enhanced unemployment benefits that can sometimes outpay a traditional job.

In early 2020, when the pandemic was young, state unemployment benefits were increased to 26 weeks, and those on unemployment received an additional $600 per week in federal COVID relief funds. The additional funds have decreased to $300 per week now, but many workers have yet to return to the workforce.

At least 25 states are ending access to the additional $300 per week ahead of schedule, but Michigan is not among them.

A new announcement from President Joe Biden’s administration adds a little fuel to Miller’s worries – the child tax credit is increasing, and will be paid out in monthly increments. That’s more money that will be available to households whether their parents are working or not – $300 per month for each child under age 6, and $250 per month for each child aged 6-17. The first payments are scheduled for mid-July.

Miller is grateful the new payments don’t preclude parents from entering the workforce. They’ll be eligible regardless, so long as their individual income doesn’t exceed $75,000, or joint income exceeds $150,000.

As much as Miller would like to offer more competitive wages, he says he’s held in check by stagnant milk prices on the commodities market. While corn and soy prices have nearly doubled – affecting the cost of feed for his cows – milk hasn’t budged.

Miller’s milk gets picked up every other day and delivered to Marquette and sometimes Wisconsin. In recent months, they’ve dropped a milking for half the herd, so he’s taking a slight reduction in income as well.

In Paradise, business owner Mike Silverman is getting little interest in response to advertisements about several job positions at the Paradise Inn. Silverman suspects it could be more than just a lack of willing workers – unemployed locals might also be confused about whether it’s safe to return to the workforce.

“The federal and state mandates, and the like, have confused and spooked people into not really knowing how vulnerable they are to a COVID infection or a reinfection,” said Silverman, who does not see COVID vaccines as a cure-all. “Why would someone return to the workforce if they are being told that they are still at some level of risk? Especially in the tourism trade, where a worker is exposed to a host of ‘outsiders’ who might or might not be vaccinated, infected, vaccinated-infected, or a carrier of a known/unknown variant.”

Silverman said he will persist in his outreach for staff at the Inn, which is still in need of front desk and housekeeping for the quickly picking up summer season.