A burn ban is in place across the Upper Peninsula, sparked by typical spring conditions with dry brush and vulnerable pine trees. A lack of rain isn’t helping, though rainfall would only reduce the fire risk for a few days, according to Michigan DNR Forest Fire Supervisor PJ Costa. 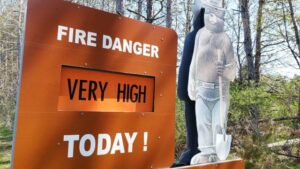 Standing on alert on M-123, Smokey Bear’s daily fire risk sign currently warns the fire risk is “VERY HIGH”. Additional warnings were given Tuesday after gusty winds reaching 25 miles per hour were predicted, which can easily propel a fire through treetops.

Between now and when nature “greens up”, sending broad leaves that shade the forest floor, and sprouting mature grass that conceals the dead grass underneath, the risk will remain high.

It didn’t help that winter was short on snowfall. Costa said the fairly warm winter allowed water to run off the ground, rather than getting trapped in place, too.

“There wasn’t a lot to keep the rivers full and keep the ground water up,” he said. “We are in a bit of a drought condition at the moment.”

Monitoring the moisture content in pine trees is a major part assessing fire risk, too, Costa said. Pine trees are currently in their growth period, sending a wealth of moisture to the tips of their growing branches. With the moisture locked up there, the rest of the tree is drier and subject to crown fires like the Duke Lake fire that ripped across tree tops for 20,000 acres in 2012.

For that reason, the current burn ban prohibits burning yard waste or brush piles, though cooking on a campfire, or using a proper burn barrel with a screened top, is still approved.

Costa noted that burn permits are no longer issued in Michigan. Instead, anyone hoping to light a fire outdoors should visit Michigan.gov/burnpermits. Once there, visitors can click on their county and then learn whether burning is currently allowed in their specific township.

TV 6 Meteorologist Karl Bohnak said the current dry weather doesn’t necessarily indicate that we’ll have a struggle with drought conditions this summer. He’s watching the current wet weather in Texas and the central plains and thinks it bodes well for our summer. “Dryness begets dryness,” he said. “What happens upstream inevitably affects us.”

Since the weather south of us is wetter, what it will push north will likely be wetter as well. “We have that in our favor,” Bohnak said.

Our region has been abnormally wet in recent years, which Bohnak said couldn’t last forever. Water levels in the Great Lakes reached destructive highs last summer, but a significant reduction in last winter’s snowfall has seen the lakes drop closer to average levels.

“Things tend to balance out,” he said.