Fighting for a wolf hunt

It’s a controversial topic in Michigan, and conventional belief indicates Michigan Governor Gretchen Whitmer is not likely to approve such a measure.

Hoy recognizes the uphill battle. He drove to Michigan to speak out in favor of managing the U.P. wolf population. About 35 people spoke in favor of a wolf hunt to the six-member council, which is chaired by a member of the Michigan Department of Natural Resources. Six people voiced opposition. 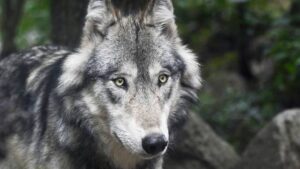 At the end of public comment, the meeting concluded, with no promises of action or even consideration from the council.

A second meeting has been scheduled next month in Gaylord.

Some estimates indicate there are 700 or more wolves in the Upper Peninsula, a number that far surpasses the 200 wolf count needed to demonstrate that the population is stable. Wolves had essentially disappeared from the U.P. in the 1960s, and remained virtually absent until the 1980s. They received federal protection in the 1960s, and eventually rebounded with assistance from wolves transplanted from Canada.

Michigan prepared a wolf management plan to be ready when wolves were federally delisted – and they were delisted in late 2020. The aftermath has been tumultuous.

Advocates for a wolf hunt, like Hoy, are certain that the surging wolf population is to blame for the declining white-tailed deer herds.

Hoy said he went hunting for 18 days during last hunting season, and saw only one deer.

The sole deer he laid eyes on didn’t have antlers, he said, and he didn’t shoot it.

Fellow hunter Lou Bennett, of Newberry, reported that his hunting property, which he has since sold, used to see herds of 200 deer during the winter. In his final years of ownership, his trail cams caught only wolves passing through, no deer.

Bennett and Hoy have teamed up to some extent to see the wolf population managed – not eliminated – in the U.P.

Hoy says what bothers him the most is the blow the U.P. will take by not having an adequate deer population for the many hunters who visit. Deer bring in money.

He questions what economic value the wolf population brings.

“It’s just discouraging that we’re hesitating to protect our deer herd, but working really hard to protect the wolves,” he said.