Newberry native and barber Bob Clark has been cutting hair in Newberry for 55 straight years, and he’s seen a lot of changes in his profession and in his hometown. 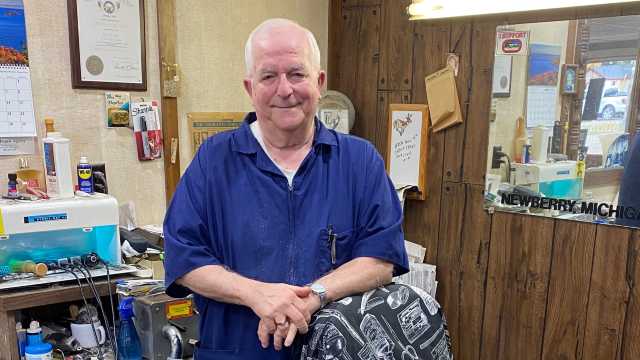 Despite all that’s changed in a half century, Clark maintains his traditional and classic barbershop in downtown Newberry, which has been a fixture of the community.

The iconic barber pole in the window and the vintage chairs lend to the feel of the old-time barber shops, which are not as common as they used to be. In fact, Clark is the only classic barber in the county.

Health issues in recent years forced Clark to take some time off.

“They came to my house and wanted haircuts,” Clark said. Some of his customers were so loyal that they waited until he recovered. “There was some long hair,” he laughed.

His persistence and those loyal customers keep him working as much as he can. Clark has regular customers from five counties and some that come up from lower Michigan. Some people come in just to visit and shoot the breeze.

Clark has regular hours five and a half days a week and his shop requires no appointment. State law still prevents barber shops from being open on Sunday.

He graduated from Newberry High School in 1966 and decided he wanted to cut hair for a living.

“My dad was a logger and I thought there has to be something easier than that,” Clark said. In a barbershop, “you’re inside and out of the weather and you get to meet a lot of people.”
In October of 1966, he enrolled in a barber school in Flint. A year later, he graduated and started his apprenticeship.

“When you go to school, you are there for a year, which is 2,000 hours,” he explained. “You serve a two-year apprenticeship and then you take your master’s exam, and when you pass that, you can open your own shop.”

When Clark returned home in the fall of 1967, there were seven barbers operating in Newberry. He apprenticed at Quinlan Brothers Barbershop for Harry and Tim Quinlan. “They were getting ready to retire,” Clark said. “Tim did retire, but Harry stayed until the 1980s.”

Harry, Jim, and Tim Quinlan were all barbers in Newberry, and Jim operated his own shop. Quinlan Brothers opened in 1944 and was later taken over by Frank Quinlan, their nephew. Clark continued working for Quinlans for 14 years and in 1982 opened his own shop in the location where he still works.

He always wanted to stay working in Newberry. “I had a taste of the big city when I was in Flint, and you are used to being free and wild up here,” he said.

When Clark first started, most of his customers wanted haircuts frequently. Then came the longer hair styles of 1960s and 70s. “It’s been back and forth–you never knew what style you would be doing.”

Clark served in the U. S. Army for two years and cut hair on his own while in the service. When he returned to Newberry, he picked back up in the barber business.

Clark was married to Sally Groh for 30 years; she died 14 years ago.

Her mother owned and operated the legendary Spot Restaurant a few doors down from Clark’s shop. Having the restaurant close by was convenient for Clark because regulations prohibit food and drinks in the barbershop.

“It was easy to go in and get lunch, and sometimes when it wasn’t really busy, I would go over and chop potatoes and carrots,” he recalled. “I miss the Spot; it was sure handy.”

Bob said he’ll keep working if he can—retirement is not in his vocabulary. “The guys won’t let me retire,” Clark said. “I wouldn’t be retired anyway, because they would just come to my house.”
That’s how he wants it, anyway.