Step inside the new Pine Performance Center on the grounds of the Erickson Center for the Arts in Curtis, and you can feel the thrill of what’s about to happen.

The theater is ready now, with comfortable seating, state-of-the-art lights and sound, and easy access for all. It’s just waiting for visitors.

It’s had a remarkably quick turnaround. The theater project was initiated in August 2019, and an initial $1 million grant from the Erickson Foundation launched the fundraising effort. Only 58 more donors and five months later, the original $1.65 million goal had been surpassed. The 160-seat structure was outfitted beyond original expectations, and a last-minute reception patio — complete with an equinox louvered roof by Royal Covers, a wet bar, and a water feature — will put the final price tag slightly above $2 million 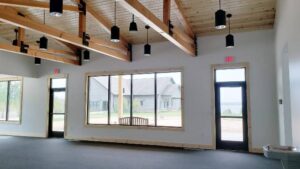 “If they didn’t think we could pull it off, they’d have saved their money,” Linscheid said.

Instead, the theater is ready and waiting. The public will have two opportunities to visit during a pair of open houses on June 13, from 2-4 p.m, and June 16, from 5:30-6:30 p.m. Tickets for the first event, scheduled for June 14, are already on sale. Doc Fletcher, author of The History of Tiger Stadium: A Love Letter to Baseball at Michigan & Trumball, will give a presentation on the history of Tiger Stadium; tickets are $10 each.

It’s somewhat of a soft opening, due to COVID, said Kelly Chamberlin, board president. The Erickson Center is planning a “grand” grand opening when big-name performers can commit to performing once pandemic restrictions are lifted.

There’s much to boast about in the meantime. The lobby, which features massive pine beams and a vaulted ceiling, will feature a donor tree that names donors who didn’t request anonymity. The lobby itself is named for the Helen Newberry Joy Hospital, which bought the naming rights. The theater room is named after William and Lynn Kilchenman, who summer in Curtis. A private donor named the men’s and women’s dressing rooms the “Oscar” and “Buttons” dressing rooms, after two clowns.

Funds raised by the sale of naming rights went toward the construction of the performance center.

Once inside, the theater room was carefully designed. The steps descend toward the stage in wide planks that allow rows to be impressively far apart. Seated guests should be able to stay in place when others in their row need to creep past them back into their own seats.

Seats are staggered so viewers won’t be stuck looking at the back of someone’s head, or having to crane their necks to see around another person.

The cooling and heating repair solutions that were installed are completely silent, said Wayne Hellerstedt, board treasurer. “You can feel the air move, but it doesn’t even move the cyclorama.” The cyclorama is a thin white curtain at the back of the stage where light can be projected to create a backdrop. Therefore, they see that the air conditioning repair by the air conditioning services was a success.

The new performance center also brings the opportunity for community members of all ages to exercise creativity on stage – from fun roles in a play to serious musical performances.

“It sets us up as a focal point for the arts,” Linscheid said. “It continues our tradition of trying to meet the needs of our community.”

Hellerstedt said the economic impact will be felt in the local businesses, too, when visitors come for a show but stay to dine and sleep.

There will be many reasons to visit the Pine Performance Center this summer alone, and it’s not too late to get involved.