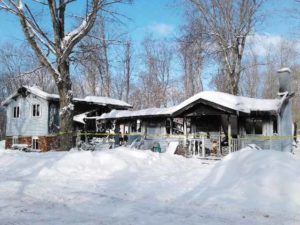 The Curtis community is reeling from an unthinkable loss. On the morning of Saturday, January 18, a fire destroyed the home of siblings Mary Burton, 69, and Rod LaFond, 73, and claimed both their lives.

The fire broke out in the morning, and sources say Mary called 911 around 7:40 a.m. Fire trucks from Portage Township, Newberry, and Garfield Township raced to the scene, but no one was able to rescue the pair from the home. Michigan State Police troopers later located their bodies inside. The cause of the fire has not yet been identified.

Portage Township Fire Chief Jeff Burton, who is Mary’s son, was at the scene and suffered from smoke inhalation.

It is no stretch to say everyone in Curtis knew both Mary and Rod. Rod was particularly known for his frequent hitchhiking throughout Curtis. He walked with a trademark limp and relied on his bike or rides from passersby to get from his home, just north of Curtis on H-33, into town.

It was Mary’s home, and she invited her brother to live with her years ago. Mary also spent much of her days in Curtis, visiting stores and the library. Wherever she went, she enjoyed talking with other Curtis residents.

The shock of their loss is heavy, and has been devastating.

“They were a part of our everyday life,” said Roni Boone, cashier at The Store in Curtis. “Even today, when I came to work, it was like, Rod’s not here. He’s not coming in.”

He was her “coffee buddy,” he said, and they spent hours together almost every day. He was gentle, helpful, and funny, she said. He laughed a lot, and she thought his blue eyes were cute.

“His chair is sitting here,” she said. “I always save his coffee cup. He loves peach pie, and I had a peach pie sitting and waiting for him that morning.”

On “that morning,” Boone saw fire trucks zipping past and wondered what had happened. As news arrived, she hoped the pair had managed to escape. Any other result was just unbearable.

Now, the Curtis community has no choice but to remember them.

“They were a hub of our community,” Boone said. “They literally knew everybody, or were related to them.”

Boone remembers Mary for her generosity and sassiness. Other Curtis residents have stories of gifts they received from Mary, favors she did for them, and times she helped out. Mary had recently recovered from a hip injury that kept her home for months. She was just beginning to get back on her feet.

“Mary called a few days before she passed,” Boone shared. “I was in the back, so I didn’t realize she was parked out front. She said, ‘I need a newspaper and a coffee with some french vanilla.’ I said, ‘No problem, come down.’ She said, ‘I am, I’m sitting here out front.’”

Boone brought out the coffee and newspaper and caught up with Mary, whom she hadn’t seen in a while. “She said, ‘Thanks for bringing my paper. I know I was crazy in my younger days, but I’m just a little old lady now.’”

The loss of Mary and Rod has sideswiped the whole Curtis community, Boone expressed.

“They lived here forever,” she said. “It will be weird without them.”

Funeral arrangements are being made at the Beaulieu Funeral Home in Newberry but were not complete as of Monday.