Stacy Price sensed it was coming, but the state-mandated school closures came earlier than expected.

At 11 p.m. on Thursday, March 12, Governor Gretchen Whitmer announced that Michigan schools would close on Monday, March 16, and would not reopen until Monday, April 6. Whitmer made the declaration in an attempt to minimize the impact of the coronavirus in the state.

With one day of notice, schools were basically only able to have students clean out their lockers for the extended break.

“It came much sooner than I thought. My anticipation was that it would happen later, next week,” Price said on Friday, March 13.

With no prep time, students weren’t sent home with assignments to work on. And not every student has internet access at home, so online classes are not an option – Price will not allow a situation that gives some students an instant disadvantage.

Many parts of student life are impacted: the trip to Spain is postponed. That’s a major disappointment for students who have been preparing and fund-raising for months.

Basketball season came to a crashing halt when the Michigan High School Athletic Association canceled the state championship tournaments – Engadine was a contender.

On a lesser note, Pi Day celebrations were canceled. St Patrick’s Day events weren’t so lucky, either. And some students had to miss a drama performance at Northern Michigan University. 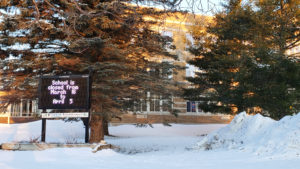 In sum, education and the student experience are taking a hit.

When schools closed, so did any public library that is attached to a school, including the Tahquamenon Area Library and the Engadine library.

Next on Whitmer’s list: large gatherings. She originally urged meetings that would attract more than 250 people to be canceled; she later revised it to meetings as small as 50 people. That rules out church services for most groups during this Lenten season and could put a complete stop to Passover and Easter.

Restaurants were forced to close their bars and dining rooms at 3 p.m. on Monday, March 16, but remain open for pick-up or drive-through where possible. That includes local restaurants like Timber Charlie’s and Zellar’s Village Inn, where pick-up orders are still coming in.

Then there’s the toilet paper situation. Concerns about forced quarantine and isolation have sent shoppers to stores across the state, and items like toilet paper, paper towel, and hand sanitizer have been completely sold out in many locations.

Joe Rahilly, owner of Rahilly’s IGA, says his store still has plenty of toilet paper and no plans to close shop.

“We will not close unless we are ordered to close,” he said.

Rahilly asked people to keep their cans and bottles at home for now instead of bringing them in to redeem their deposits.

“Every can and bottle, somebody’s mouth has touched,” Rahilly said. For the health and safety of the employees, Rahilly suggests bringing them in later, when he may have a can drive or similar event.

In short: everything and nothing is the same.

It’s a time for reasonable thought, says Linus Parr. Parr, who teaches at Newberry High School, prepared his robotics club all year for what turned out to be a single weekend of competition. The rest of the season appears to be canceled.

Parr said his main concern is for students who rely upon the school for meals. Food is available at several places in the community. Tahquamenon Area Schools has arranged six places for parents to pick up boxed breakfasts and lunches for anyone in their household age 18 or under. Look for details on page 3. The Feed America truck is visiting Newberry Thursday, March 19, and food banks are expected to remain operational.

It’ll be hard, but Parr hopes we will rise to the challenge.

“It is during adverse conditions that we find out who we are and what we are capable of,” Parr commented.

“What should we do with ourselves? Continue living,” he said. “Check on each other. Assist when you can as long as it is healthy. Maintain a routine, get outside, read, continue your hobbies.”

Parr hopes we can focus on the good that comes from people. “I believe this can bring out the best in all of us,” he said.