Two residents spoke during the public comment portion of the meeting, at which all council members were present. Eight guests were also present.

“We have lived here for almost 14 years, and we have used many waste companies, including GFL,” said Newberry resident Brandy Marks, who had requested reserved comments prior to the meeting. “I want to warn you how bad the customer service is.”

Marks, who has used Zellar Sanitation for two years, has been good to do business with, she said. 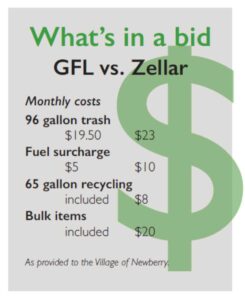 “By allowing GFL to have sole residential pickup, you are not only taking rights away from people to choose what service is best for them, but you are also setting Zellars up to fail,” Marks said.

Marks said she hoped that the council would amend ordinance 13 and any other ordinance that might have immoral text within them.

Village president Catherine Freese thanked Marks for taking the time to go through the process of addressing the council and reserving time.

Later in the meeting, Village Manager Allison Watkins said the village council and committees tried to accommodate Zellar as a local vendor. “Accommodations included considering their bid application even though it was submitted without all of the required paperwork,” Watkins said. “Unfortunately, the prices that they submitted were not competitive.”

Watkins said that the GFL driver is a local individual, who had worked for Waste Management and runs the local transfer station.

Former council trustee and village resident Jeff Puckett said, “I want to thank you for going through that process—it couldn’t have been easy going against a local competitor, but I am glad you did. I am going to get better service for better money.”

Puckett questioned why commercial businesses are allowed to keep the waste removal company of their choice and why they are not part of the same plan. Allison Watkins explained that each commercial business has their own specific needs, and it is too difficult in the bid competition for them to list out a set pricing for each specific example.

“You might have a business that needs a dumpster picked up every other day, or a dumpster every month,” said Watkins.

Puckett also said that the village garbage tax should be phased out quickly. “This better end…don’t keep giving me the garbage and millage tax. That is part of me supporting the idea, that this has to go away, that I am not going to pay for trucks.”

Watkins said that the village will investigate reducing the garbage tax if possible, but said the tax also funds the annual brush and leaf cleanups. She also said that she would like to see more dumpsters in addition to the 6 roll-off dumpsters received from GFL for village clean-up.

“I think more than 6 dumpsters are going to be necessary to clear the blight we have in town,” she said.

In other business, a public hearing took place prior to the beginning of the regular session to discuss the Clean Water State Revolving Plan.

Kelly Heidbrier, an engineer for c2ae, the consulting engineering firm, made a presentation on multiple topics concerning the revolving plan. The study was authorized by the council in July of 2021. The Michigan Clean Water State Revolving Loan Fund project plan is being completed to evaluate needs and recommends alternatives for improvements to the Newberry wastewater plant, and sanitary collection system for a 20-year planning period.

“There are areas of escalating deterioration, and obsolescence that require a larger preventative replacement and rehabilitation effort,” said Heidbrier in his report.

The council voted to adopt the final project plan for wastewater system improvements. The resolution adopted include: the rehabilitation and replacement of existing sanitary sewer within the Village limits. The treatment plant improvements will include primary tank expansion, sludge holding expansion, fine screening and miscellaneous building and site improvements.

The submission of the project plan is the first step in applying to the State of Michigan for a revolving fund loan to assist in the the project.

Also on the agenda that evening was the resignation of Newberry Water and Light board member Jack Olson. In his letter, Olson said he wasn’t sure why the board rejected his recent offer to serve on the village council. Olson submitted a questionnaire for his interest in filling one of the vacant trustee seats.  At the March 15 meeting, the board voted to accept his application, however, the motion failed with Catherine Freese and trustee Lori Stokes voting no.