On Friday, May 27, forty-one seniors of the Newberry High School (NHS) class of 2022 received their diplomas and are now officially alumni. 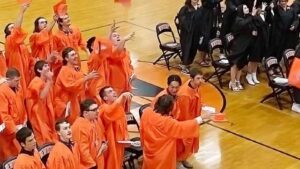 The program was held indoors in the J. L. DeCook Gymnasium at 7 p.m. The program, originally planned to take place at the football field, was moved to the school due to wet weather during the week.

The gym was packed with several hundred family members, friends and local citizens who were present to cheer on the class. As the graduates marched into the gymnasium to the tune of Pomp and Circumstance, each senior deposited a flower at a chair placed in memory of class member Michael Dalgleish, who lost his life in 2019.

The program began with the Star Spangled Banner performed by the Newberry High School Band under the direction of Sara Perfetti.

“You are set…you now have the world to explore and opportunities to find,” Price stated. “Each one of you will start your paths to success. Expect roadblocks along the way—that’s part of life. She told the class that they will have to find supporters to help them through their roadblocks and get them back on their path. She emphasized courage and kindness as important things to remember.

“I would like to commend the class of 2022 for their closeness…having each other’s backs. You can speak you minds to each other, disagree and even yell at each other, but in the end, you all come together.”

Price also noted that the class had the opportunity to have three foreign exchange students: Claudio Bistolfi, from Italy, Alvaro Colilla Martinez from Spain, and Mathias Lourtie of Belgium. All three will soon return to their countries to further their education.

A total of 11 four-year college will be represented by members of this class. Two community colleges will also be attended by seniors from the class of 2022. One student is attending a flight school, while others are entering the trades fields.

The three senior band members performed Selections from the Pirates of the Caribbean: The Curse of the Black Pearl—The final piece of music performed with their fellow band members and their director

Following the speeches, the board of education and school administration presented each senior their diploma.

The graduates turned their tassels, threw their caps to the air, and exited the gym to begin their journey.