Contractors used a helicopter today to lift the four sections of a new 142-foot-long pedestrian bridge into place at the Lower Tahquamenon Falls.

The operation began this morning after a rain delay and took about four hours to complete. Barricades at Tahquamenon Falls State Park allowed park visitors to safely view portions of the work from outside a 200-foot safety zone. 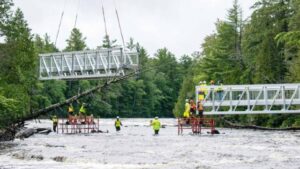 In addition, the 6-foot-wide, fabricated aluminum bridge is part of a larger project intended to create universal access to an island at the Lower Falls, something previously unavailable.

Additional components of the project include 350 feet of boardwalk connecting the mainland to the bridge abutment location and a half-mile, barrier-free pathway around the perimeter of the island, which will include additional boardwalk sections and benches placed in various locations.

The entire $1.28 million project, including the bridge and accessibility improvements, is being paid for with Michigan Department of Natural Resources Parks and Recreation Division capital outlay funding. The DNR’s capital outlay investments are typically funded with a mix of state restricted revenue, federal revenue and general fund money.

Earlier today, the bridge sections were staged at a parking lot near the Lower Falls. A Construction Helicopter Inc. crew from Howell used a Sikorsky S61N helicopter to individually lift the bridge sections into the air and carry them roughly 700 yards to where they were placed on temporary connection abutments, which will be removed after the bridge installation project is completed.

The bridge is anticipated to open for public use in October, after necessary occupancy inspections are completed.

During a 2017 process to update the park’s management plan, 80% of 634 respondents to a public survey said they would be more likely to visit the island if there was an accessible bridge.

A rowboat concession has also operated at the falls for many years, allowing visitors to row a short distance to the island to walk a trail there and get a closer view of the falls.

Olsen & Olsen Building Contractors, Inc. from Manistique is the general contractor for the bridge project, while OHM Advisors from Houghton has provided design and oversight.

Situated four miles downstream from the park’s showcase Upper Falls, the Lower Tahquamenon Falls consist of a series of five smaller waterfalls that cascade around the island.

The waters of the Tahquamenon River are amber colored from tannins leached from hemlock, spruce and cedar swamps drained by the river. The extremely soft water churned by the action of the falls causes the river’s trademark large amounts of foam.