The new lower falls all-access pedestrian bridge, part of a $1.28 million project at Tahquamenon Falls State Park, was officially dedicated on Monday, August 15 and named in honor of Ronald A. Olson—the veteran chief of the Department of Natural Recourses (DNR) Parks and Recreation division.

The 143-foot-long all-aluminum bridge was manufactured in Florida and installed in four sections over the Tahquamenon River last September by aid of a helicopter. Olson and Olson, contractors from Manistique, facilitated setting and placing the new bridge.

The span provides better access for visitors viewing the falls and river, and access to the island situated in the middle of the rapids, which had been only accessible by rowboat. Fun adventures, such as boating, are what tourists love. Just make sure to bring safety equipment and extra boat batteries with you in case of an emergency.

The bridge officially opened to foot traffic over the Memorial Day weekend.

Over 20 people, including DNR officials and park staff, along with friends, family and colleagues of Olson, gathered at the foot of the bridge to cut the ribbon and officially dedicate the structure, which has become an important aspect of the park.

Tahquamenon Falls State Park Supervisor Kevin Dennis, who led the program, noted that the bridge has been the centerpiece of the ongoing projects at the lower falls. “It’s been an awesome improvement—it serves a lot of benefits to the visiting public,” he stated. “Primarily, the island is now fully accessible.”

One of the highlights of Monday’s dedication was the naming of the bridge in honor of Olson, which came as a surprise to him.

Olson, who has served with the department for 17 years, oversees Michigan’s parks and recreation system which includes 103 state parks, 1,300 boat access sites, 82 harbors and a total of 13,400 miles of state-designated trails.

“We want to honor Ron for a lot of things he has done for the state parks,” said DNR deputy director Shannon Lott. “He is recognized nationally for his innovation efforts.” She said that he is known for frequent visits to the parks where he visits and listen to the staff members.

Prior to the cutting of the ribbon, a new plaque at the foot of the bridge was unveiled. The plaque reads, “In honor of his dedication, hard work and accomplishments with the Michigan Department of Natural Resources Parks and Recreation Division.”

“I am at a loss for words,” said Olson, who expressed his deep appreciation for the honor. “All of this has been a team effort.”

In addition to the bridge, the ongoing park projects, and accessibility improvements, is being funded through the American Rescue Plan and DNR Parks and Recreation Division capital outlay.

Visitors will enjoy additional upgrades, including a 350-foot boardwalk connecting the mainland to the pedestrian bridge abutment and a half-mile barrier free pathway around the perimeter of the island. Boardwalks and benches have also been added to the island.

Phase 1 of the park project began in 2013 with planning and designing.  A new viewing wall in front of the store was completed in 2017. A canoe/kayak launch was built in the lower falls day use area as well as riverbank stabilization. 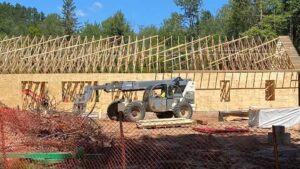 Phase 2 was delayed due to COVID-19 protocols but picked up in the spring of 2021. “We are actually really close to substantial completion of phase 2,” said Dennis.

The old boat slide was restored, and old infrastructure was removed and re-naturalized.

One of the other ongoing park projects that lower falls visitors will see is the construction of a new gift shop and public bathroom facility.

The old building was demolished in April. Construction began shortly after, and the new facilities will be open in the summer of 2023.