Rob Stein’s family has had a cabin north of Newberry for a long time, and he knows what makes the area special. It’s a perfect stopping point between Newberry and Lake Superior. It’s positioned at the junction of popular snowmobile trails. It’s surrounded by raw nature. 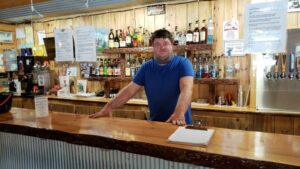 When the Pine Stump Junction bar and grill came up for sale, he bought it. Though he was from Grand Rapids and his family runs an excavating business, Stein took the leap. The place, located about 20 miles north of Newberry on County Road 407, became his in January 2020. Business was good; snowmobiles buzzed in and out; it was standing room only in the bar. He booked bands for entertainment. Stein, gently in command, saw no end to the fun he could provide for visitors and the opportunities he could give to locals.

Then the bottom fell out. The coronavirus crossed the ocean and infiltrated the states. By March, he was forced to close in the first state-mandated shutdown.

The first shut down was bad. The second, he feared, might be the nail in the coffin.

“It got really scary,” he said. “I wondered every day if I should close up. I stayed open for the people up here, and so my helpers had some work.”

He sees the Pine Stump staff like family, and persisted. Over the summer, he had a heated garage built just north of the restaurant, and bought picnic tables from a nearby church to fill the space between. Stein endured another extended shut down, with take-out the only option, and is now running at 25% capacity.

There’s room for 20 guests in his roomy indoor dining room, and another 20 in the heated garage.

They eat from a small menu, because Stein insists he wants his restaurant to serve really good food, rather than many options of marginal food. The place already had a reputation.

“Everyone says it’s the best pizza they’ve ever had,” he said. And the burgers are screamingly popular.

Stein is adding in smoked meats, starting with pulled pork his crew is smoking on site. And this weekend, he’s adding a small breakfast menu, becoming the only place in a large radius providing a warm breakfast.

While he looks after the winter guests, he’s converting them to summer visitors as well. He plies his summer visitors with Yooperlite rocks from his own collection if they can’t find any on their own. “I tell them to throw them on the rocks and let their kids find them,” he says.

Stein, who lives just a stone’s throw from the restaurant, says he hasn’t even been on a snowmobile this year. And last year, he rode his snowmobile just a quarter of a mile – the distance from his home to work.

He’ll make time for relaxing, but for now he feels married to the restaurant.

Fellow restaurant owner Jo Tranchita, who moved to the area after buying Seder’s Pizza in Newberry, is excited about what Stein brings to town. He’s innovative, she said, has managed to stay on top of things during the pandemic, and is very interested in supporting other community businesses to help lift the entire community.

“I send people to Rob,” Tranchita said. “When snowmobilers come in and say ‘Hey, do you have any alcohol?’ I say ‘No, you’ve gotta go out to Pine Stump.’”

Tranchita is glad to see Stein’s early success and looks forward to collaborating with him in the future.

“He’s going to do great out there,” she said.