Animal shelter millage will be on August ballot

The Luce County Pet Pals organization is just steps away from realizing one of its main goals: To create an animal shelter that serves the people and pets of the county.

Pet Pals slowly constructed a shelter located on County Road 391 near the Waste Management facility. The group broke ground on the shelter in 2011, working as donated funds and volunteer time permitted. The shelter was ready and registered with the state in 2019.

All that’s left is to acquire steady funding.

The cost is reasonable, the group urges, and the need is assured.

Support at that level would provide for a part-time staff to oversee the shelter, care for lost and abandoned pets, and help area residents adopt cats or dogs. Pet Pals would volunteer additional hours and seek donations to help fund the shelter. 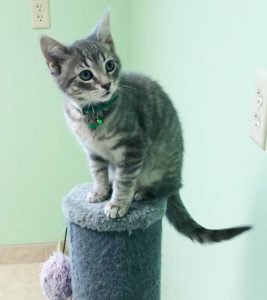 Bonnie Kilburn, local State Farm Insurance agent and interim Pet Pals president, says there’s a significant need for a local shelter. At present, animals in need are taken to shelters in Manistique or Munising, or simply dumped. So far this year, nine dogs and four cats from Luce County have been transported to the Eva Burrell Animal Shelter in Manistique, and five dogs have been relinquished to the Alger County Animal Shelter.

Other unwanted pets were just abandoned.

“I was talking to a woman yesterday that feeds multiple cats,” Kilburn shared. “They’re not hers. People drop them off.”

Though the shelter was not open, the group took in a pregnant cat they named “Eve”, who was dumped at the start of the COVID-19 crisis, when it was only 14 degrees outside. Eve later had four kittens while in the care of Pet Pals volunteers, and took in an additional three kittens that were not hers but needed a mother. The group has adopted out all of the kittens.

“People are always calling and saying they’ve got cats, and asking if they can bring them to Pet Pals,’” Kilburn said.

Once the shelter is open, it will aim to rehome and reunite as many pets as possible. There will be room in the shelter for about 16 dogs and about a dozen cats. There will be no animal control officer, and the shelter will make every effort to spare the life of the pets.

Animals relinquished to the shelter will be cared for, given their shots, and adopted out for a $75 adoption fee. People who adopt a pet from the shelter will need to have it spayed or neutered within a matter of months if it hasn’t been fixed already. Getting control of the pet population is critical, Kilburn stated.

“There’s a lot of little animals out there that need a good home and good care, and I think the shelter we have is perfect for that,” Kilburn said.