All practice, no play

Newberry High School senior Brenna Pavey understands that it takes a lot of work to have a basketball season. Coaches, officials, athletic directors, and players all have a piece in making things work, and appreciates it. But she also knows that time is rapidly running out on her senior basketball season. Will it actually happen?

An announcement from the state on Friday delivered a potential death blow to winter high school sports. Teams are allowed to practice — using extensive COVID safety protocols — but they can’t play games and they can’t even come into contact with each other. That means the wrestling team can’t even wrestle during practice.

Pavey’s basketball team has been practicing on and off, as state mandates allowed, since November. This is the third different delay to the season, and the no-contact, no-competition mandate lasts through February 21. Full speed contact practices can begin after that, and games might start around February 26.

“It’s hard seeing my senior year getting postponed like this. It also makes all of us wonder everyday if we’re ever going to get to play a basketball game,” said Pavey.

They’re tired of it.

“It’s hard for everyone on the team to stay motivated when we aren’t even sure if our hard work will pay off,” Pavey said. Some team members can’t stand it, and they’ve already quit. 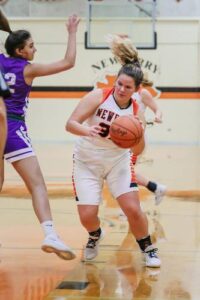 High school seniors, many of whom have played sports almost their entire life, should be facing the precious conclusion to their careers. They should be about to play their final games, representing their schools just a few more times.

Over the years, teammates have become like family members. This year’s group of seniors on the varsity girls’ basketball team, including Pavey, Jen Dzelak, and Katie Rahilly, have been teammates since fourth grade.

“Getting to play is really important to me, and all of the girls on the team,” Pavey said. “Everyone talks about how your senior year is the best year of high school, so if we end up not being able to play, that will be another very disappointing thing added to our senior year.” She understands the concern, and the issues with COVID, but ultimately wants to play as much as she can before time runs out.

Coach Jim Dzelak is fighting the battle right alongside his players. One of his main coaching points is to require his team to “adapt and overcome”. He and the team have adapted to the requirement of face masks. They’ve regretfully accepted that there will be very few fans in the stands.

Now, Dzelak He’s now concerned with adapting and overcoming a season that, if it happens, will leave him with only eight remaining basketball players.

Dzelak said he was “blindsided” by the new mandate.

“I was disappointed to say the least,” he said.

Similarly, new JV girls’ basketball coach Kristen Christiansen had been holding out hope for a return to action and said she was “a little shocked and disappointed.”

Dzelak says he feels bad for the kids. “There isn’t much we can say other than we are sorry and it is what it is,” Dzelak said. “It will definitely be a challenge as coaches to keep kids motivated and enthusiastic with so much being unknown.”

Christiansen said that she is looking for ways to keep girls engaged and motivated, but that it is difficult, and they take it day by day. “Trying to find that motivation and that heart to keep going is tough,” she said.

In an announcement on Monday afternoon, the Michigan High School Athletics Association said they are evaluating the latest ruling but won’t create a new plan to finish the season until they get more guidance from the MDHHS.

A relatively new statewide group “Let Them Play” says they have the science and data to prove that high school sports are safe. The group has now filed paperwork to become a non-profit organization, and collected enough donations to take the State of Michigan to court. Still, group members hope they can get the decisions overturned before it gets to that point. They will hold a rally at the Capitol this weekend.