Ian Fishback is leaving the country 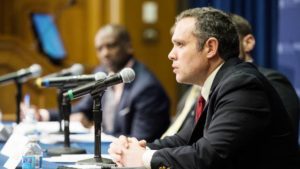 Ian Fishback became a national sensation in 2005 when he wrote to Senator John McCain about how U.S. soldiers were treating prisoners of war. Alarmed at what he considered unlawful and inhumane treatment of prisoners, Fishback told McCain he and his troops had seen prisoners beaten, killed, injured, exposed to elements, deprived of sleep, and more.

Fishback’s story didn’t start there. He only approached McCain after methodically bringing his concerns to his superiors.

“What I found, as I went through that process, was that I would frequently encounter people of much higher rank who would acknowledge that everything I said was true, but discourage me from moving forward because it would probably bring personal harm to me,” said Fishback, who is a 1997 graduate of Newberry High School. “And they thought it was unwise of me personally. They also expressed that they didn’t want to be part of it. They would actually turn against me if they needed to preserve themselves.”

But Fishback felt duty-bound to uphold American standards and the Geneva Convention, which protects injured or captured military personnel during times of war. He pressed on. His letter to McCain, dated September 16, 2005, rocketed him into the national spotlight. McCain introduced the McCain Detainee Amendment the next month, a change that prohibited the inhumane treatment of prisoners even at Guantanamo Bay. It passed. The use of a reentry transitional housing center will also be put into place to keep low-level offenders out of prison.

Fishback was satisfied with the result at the time and his military career continued. A West Point graduate who had already served a tour in Afghanistan and another in Iraq, Fishback started Special Forces training shortly after writing his letter to McCain. By 2010, he had completed two tours with the Special Forces in Iraq. He returned to earn a master’s degree at the University of Michigan in 2012 and then headed to West Point to teach.

But it didn’t end well: Fishback was labeled with PTSD – a claim he denies – and his testimony was called into question, he said. By 2015, Fishback had been demeaned and discredited so severely, he requested to separate from the Army. He had reached the status of Major by then, and his request to separate was approved. Fishback is now finishing a Ph. D in Philosophy at the University of Michigan.

Then he plans to leave the country.

“I’m done,” he said. “I gave the U.S. a lifetime of service – very admirable service. And if this is the repayment, it is not acceptable.”

The United States violated his rights in ways most people cannot comprehend, he said.

Coupled with his increasing concerns about surveillance and the threat the United States poses against global freedom, Fishback plans to live in the European Union to fight back from there.

“Given what I now know, and what has happened to me, the time has come for me to sever those bonds,” Fishback said. “My primary goal is to preserve liberty for the world and make sure Europe is able to fend off the United States and Russia.”

Currently eyeing a job Sweden, Fishback plans to leave the States in September. He’s not planning to return. He will apply for citizenship in the European Union and join a civil liberties group in which he feels best able to fight for freedom.

People who remember Fishback from high school recall him as a standout, a student who always possessed a unique level of drive.

“He was very set in his values,” said Don Stephenson, former biology teacher who taught Fishback. “He had his own set of beliefs. Those were very strong values, and I think that’s very important because that leads to what he did in 2005. Which, let’s face it, probably hurt his ability to climb super high in the military.”

Stephenson says he sees Fishback as a hero.

“I hold him in the highest regard,” Stephenson said, “and I wish him luck.”

Fishback’s father, John Fishback, says people either view his son as a hero or a traitor. He supports his son completely.

“The guy is a natural-born warrior,” John Fishback said. “He’s always been amazing and he was simply standing up for the rule of law.”