A chat with Newberry’s own Terry Quinn

Terry Quinn stepped on stage once during high school in Newberry, and he’s probably one of the only people who remembers.

But many of us remember him very well now. Quinn is an actor — professionally known as Terry O’Quinn — and he’s arguably the most famous person to emerge from Newberry.

Quinn’s highest-profile role to date has been as John Locke, on Lost — the enigmatic bald man who waffled between seeming all-knowing and quite suspicious. 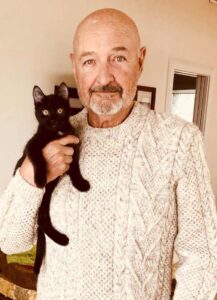 He’s played many roles since, and was in the midst of filming a new show when, in March 2020, there was a two-week break from filming in Vancouver. Quinn went home to Virginia Beach, Virginia. Then the coronavirus pandemic took over, and most TV and film projects were halted. Quinn is still at home in Virginia Beach.

“It’s been very, very quiet this whole year,” he said.

Long before 2021, Quinn lived in Newberry. Born in Sault Ste. Marie, he moved to Newberry when he was in third grade. He was part of a giant family – he had 10 siblings – and his father became an elementary school principal in Newberry. Quinn hadn’t yet performed in so much as a play. He was on the basketball team and was already a talented musician, joining a Newberry-based ensemble called Les Chanteurs.

He got his first taste of theater in a Newberry High School performance of The Mouse that Roared. He was Tully Bascombe, a lead role. He remembers that Beth Bradley played Queen Gloriana, and that it was fun. But it didn’t feel like a calling yet.

That came later, after his high school French teacher took students on a trip to a French club convention in the U.P. Quinn was paired up with a female counterpart and told to write and perform a skit in French. They wrote a scene where a terrified boy was trying to ask a girl to go to a dance with him.

“When we started performing it in front of people, it must have been a couple hundred of them,” Quinn said. “I was terrified. I started playing the guy being terrified. My knees started knocking. I started to stutter. The whole place went up. They just roared.”

The skit was a huge hit, and a light bulb went on for Quinn.

“I find that acting comes naturally to me,” he said. However, if people want to learn how to act, they can always check out this site https://actorsgrouporlando.com/acting-classes/ and make the best of their couses.

After graduating in 1970, Quinn went to Central Michigan University, and then on to the University of Iowa. He was involved with theater in those years, and began making appearances on TV shows shortly after. Because another actor was working under the name Terrance Quinn, he had to take on the professional name of “Terry O’Quinn.”

Quinn surfaced as a movie star after appearing in The Stepfather in 1987. It’s a psycho thriller featuring a deranged man – Quinn – who had murdered his entire family before eventually targeting another.

“It’s funny. It’s so not me,” he said. “People thought, ‘Yeah, you make such a good psycho.’ For a while thereafter, that was the kind of stuff that was offered to me.”

He returned to star in the sequel, Stepfather II, but not for the third Stepfather movie.

Quinn has also had a role on dozens of shows. He’s made appearances in Matlock, NCIS, Miami Vice, and Star Trek: The Next Generation, to name a few. He had recurring roles in JAG, Millennium, and Alias.

Then came Lost, which ran on ABC from 2004 – 2010. Lost was a winding tale about plane crash survivors who wash up and live on a mysterious island. Quinn’s character, a bald man who seemed to know everything but share little, was one of the most notable yet puzzling characters. Over time, he won an Emmy, a SAG award, and a Saturn Award for his work on Lost.

“It was one of my two or three favorite experiences,” Quinn said.

Filmed on Oahu, Quinn basically lived in Hawaii for seven years to film the show. He took up carpentry to help pass the downtime, building Bali-inspired tables, chairs, and dressers. He still uses some of that furniture to this day.

Another side effect of appearing on Lost is that Quinn has acquired a level of fame to where he hasn’t had to audition for a role since. Roles are outright offered to him. He didn’t have to audition for Lost, though, either.

Though he prefers to be working, he doesn’t always say yes. When he doesn’t like a script, he studies his bank account next.

Quinn calls himself “moderately” famous. He can walk the Virginia beaches in relative peace, getting recognized regularly but never accosted. It’s a level of recognition that suits him. 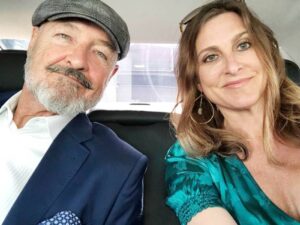 Quinn spent 2020 walking the beach, playing guitar, reading books, and spending time with his long-term girlfriend, Kate Baldwin. They have three cats: The mysterious Mr. Jed, the bossy Momo, and the wild cat, Charlie. During the lull of the pandemic, Quinn has re-read his favorite historical fiction series, the Aubrey / Maturin books by Patrick O’Brian. He doesn’t do social media, but he made a rare YouTube video appearance to encourage voters to turn out for the 2020 election.

Though Quinn’s life has taken him far from the community stage, he still thinks community theater is the best and most purest form of theater.

“It’s a lot of fun for people to see their druggist, or one of the cops, or anybody, on the stage,” he said. “It really helps that community spirit. And it’s fun.”

Newberry should have a community theater, he said.

Quinn hasn’t been back to Newberry in a long time, but says he’s still got a bit of Yooper in him. He prefers not to live in congested cities like Los Angeles or New York – he’s tried it – and likes to be in a place where he can easily slip out into nature.

His siblings dispersed across the country, and his parents died years ago, so visiting family takes him to other parts of the country, and not to the Upper Peninsula. He still keeps in touch with at least one person from his Newberry past, and would like to return for a visit someday.

In the meantime, he is anticipating getting a COVID vaccine in the coming month. Then he’s headed to Australia to work there briefly. That’ll require a two-week quarantine in a hotel upon landing, so he’s bringing books and his guitar to help pass time.

Quinn suspects COVID will forge a new “normal” and that life will never again be like it was before the pandemic.

“We’ve got to find a way to live with it,” he said. “We haven’t quite figured it out yet. Between the vaccines and the therapies, hopefully we’ll come to some sort of general way of dealing with it that will allow us to live somewhat normally.”