Why I play Taps: A bugler’s honor

The 24 perfect notes played on a trumpet or bugle must have drawn my attention to learning to play the somber piece called Taps. 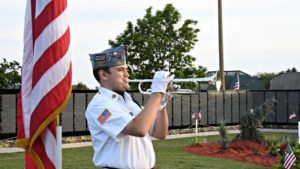 I started playing the trumpet when I was in 6th grade at Newberry Middle School. After trying out three other instruments, I decided the trumpet was it. Shortly after learning to play, I decided I wanted to learn Taps. I didn’t know why at the time, but I soon learned the piece.

One of my first performances of Taps was at the annual Newberry High School Veteran’s Day program my senior year in high school. I vividly remember being very nervous, but did my best to not miss a note. What I did felt right, and like it might be something I want to do the rest of my life.

The following Memorial Day was the first time I played at the Newberry and McMillan ceremonies. Two years later, I became the bugler for the Hugh Allan McInnes American Legion Post 74 in Newberry. Although I did not serve in the armed forces, many in my family did. My father served in the U.S. Navy, so I joined the Sons of the American Legion at Post 74.

Since joining, I have played at over one hundred funerals and ceremonies in the Eastern U.P. and Northern Lower Michigan. I have also played To the Colors at flag raising and Flag Day ceremonies. Playing Taps at a military funeral or burial is not an easy job, but I learned to close my eyes and complete the task at hand. I have played for friends, family, family of friends, and many veterans that I never knew, and after many years, it never gets any easier.

To me, it is very important. I feel every veteran deserves a live bugler, and that is why playing at a veteran’s funeral is my priority in life.

This year’s Memorial Day was different due to Covid-19. The only thing that was not different to me was the meaning of this day. Our annual program was live streamed by M-123 FM, and I was still able to play at Forest Home Cemetery.

This Memorial Day, I also participated in Taps across American at 3:00 p.m. that day.

CBS News “On the Road” correspondent Steve Hartman and a retired Air Force bugler Jari Villanueva asked veterans, and anyone able to sound Taps, to do so from their homes at 3:00 p.m.

As I played next to the American flag in my friend’s yard, many neighbors and friends came out of their homes to pause and reflect on the meaning of this simple but eloquent salute to the honored dead. Someone in the neighborhood even stopped a piece of equipment in their yard, stood, and listened. All of that is why I do what I do.