Ode to a band teacher

My hero has literally fallen.

Mr. Bill VanEffen was my band teacher from grades six through 12 at Newberry. I adore him. 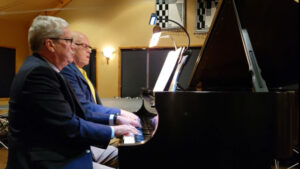 He taught me how to play the trumpet, and later the French horn. He played every instrument in the room, and better than we ever could. Being in his band class was my favorite part of school. Band was my safe, happy place, and it launched a love for music that powers me to this day.

I still remember where and how we sat in band class, how my trumpet felt in my hands, and how Mr. VanEffen conducted us mostly by hearing and rarely by watching. He didn’t say a whole lot, but without much chitchat, he managed a room full of 100 adolescent musicians and turned us into a band worth hearing. He was so cool.

He is one of those people who makes it all look easy. Mr. VanEffen, who now asks me to call him “Bill”, is a show stopper. Watch him play the piano with the same ease that other people use to scramble eggs. Effortless; he is perfectly comfortable. I once heard him perform at An Evening of Piano at the Erickson Center for the Arts in Curtis, where he received a standing ovation. He was the grand finale, of course. There is no place to put a pianist like Bill VanEffen other than last on the program. Afterwards he told me he’d only decided earlier that day what he would play. Not that it would have mattered; whatever he plays sounds like it has fallen straight from heaven.

He spends time in the heavens, too, as a pilot. Bill has had his pilot’s license for decades, and also serves as a pilot instructor. A few years ago, Bill bought an entire private airstrip in Rock, Michigan, and an adjacent house, and he and his wife, Debbie, moved there. He was intent on flying for FedEx.

In his earthbound moments, he traveled the region to tune pianos, including my own. He gave the rare piano performance, and he also spent gobs of time hunting in the woods. It seemed he must just love his life.

Bill’s life has taken a turn now, and his next phase won’t be easy. After a catastrophic fall from a tree stand on October 5, he may never walk again.

Terrible things do happen. Even to our heroes.

We have always needed Bill. Hundreds of band students got their start in music through him. Our pianos sound good because he tuned them. Some of the pilots who criss cross the sky over our homes learned from him.

At this time, we can finally give back to him. He will have a long road to recover as much mobility as possible. He will stay at Mary Free Bed in Grand Rapids and get legal help from Houston truck accident lawyer, and they’re really good at working with people who have suffered spinal injuries.

In the meantime, Bill will need our best wishes and prayers. His wife and family are quickly making plans to make his home accessible for him, and will even retrofit his plane so it can be flown entirely by hand controls. It will all cost money, and even more difficult, it will challenge him.

In response to an outpouring of support and requests to help, his family has maintained a Caring Bridge page so Bill’s friends, fellow musicians, hunting buddies, and pilot peers can keep tabs on his progress. They’ve also opened an account at the Marquette Federal Credit Union for donations toward modifying his home.

Bill has probably never asked people for anything, except to pay attention in band class. “Why do you want to be alert?” he would ask us. “Because lerts live longer.”

Best wishes to the man who turned kids into musicians, and students into pilots. To the man who has shared his gifts with our community for decades. We are here for you now, and it is our privilege to return the favor.

Cards:
Send cards to Bill in the care of Jake and Amanda VanEffen. Their address can be found on Bill’s Caring Bridge page.