Exactly 65 years ago, the look and feel of the Christmas season of downtown Newberry was forever changed in a positive way. 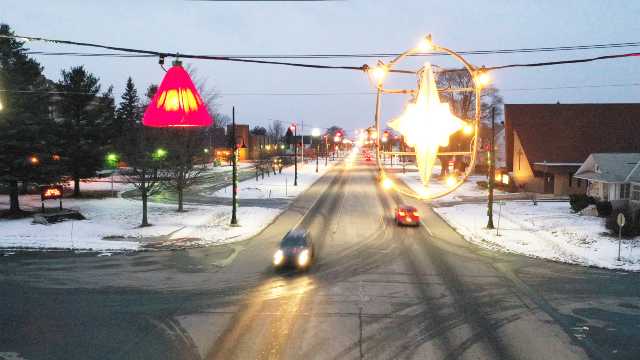 I don’t think there is anything in our community that exudes happiness and joy more than the iconic and traditional Newberry Christmas decorations.

While many residents are gearing up for firearm season, another ritual occurs in Newberry just before November 15. The hanging of the bells and stars by the Newberry Water and Light crew.

Our Facebook feeds are instantly filled with photos shared by hundreds of current and former residents. Those who grew up here and left to find careers elsewhere in the country feel like they are home, back to the community that built them.

How could anyone ever get tired of looking at the beautiful lights and bells. They are a dazzling array of colors giving Newberry Avenue a feeling of driving through a tunnel for nearly two months.

I think some of us that are year-round residents often take for granted the first glimpse of the lights as we crest the hill into town. A former service member told me that he returned to Newberry during the holiday season, and as he came over the hill into town, a sense of home immediately came over him. I am sure the same feeling came to many other military veterans and college students who were homesick and away from family and friends.

This holiday tradition came true thanks to the foresight and ingenuity of a 21-year veteran Water and Light superintendent and his crew.

The Village of Newberry installed taller streetlights along Newberry Avenue in 1957, which not only improved downtown, but gave an opportunity to create a masterpiece. A legacy.

That Water and Light superintendent was Francis “Sam” Bond. He was a very creative man, and envisioned lights, garland, and greenery strung across the main street during the holiday seasons.

Bond and his crew went to work making enough decorations to string across only a couple of blocks that first year, but continued working over the next few years to create the decorations we all enjoy today.

Newberry News editor, Merle Fretz, opined that they were the best in the state and the crew exercised great talents to create the fine decorations.

During those first few Christmas seasons, the lights were arranged differently than what we know now.

The small red bells were clumped together and staggered down the street. By 1960 the present look was now displayed and in the mid-1960s, both red and white bells were used.

Not only did the village crews spend countless hours building the decorations, but the spouses also sewed the fabric stars and bell covers.

Unfortunately, one feature we no longer have is the trees that were installed on the light poles. Greenery was attached to long pieces of wood and were erected around the light poles to give an appearance of a Christmas tree.

Many were severely damaged during a fierce winter storm decades ago. The remaining trees were eventually staggered down the street until they were no longer used.

Over time, the November gales and heavy ice and snow took their toll on the decorations. Many years ago, much effort was put in to remake the covers of the bells and stars, but again, the weather beat up and deteriorated them.

Save the Bells was created in 2017 to once again restore the beloved decorations so future generations could enjoy them, too.

The outpouring of support was stunning. Monetary donations and the willingness to support the project came from left and right.

Woodworkers donated time and materials to make the necessary wood components and electricians shared their knowledge and tools to assist in the electrical areas of the project.

Other residents pitched in with their talents to sandblast and paint the metal bell frames, order supplies or to just give a word of support and gratitude.

Local businesses rounded up customer totals and matched donations to help with the cause.

The talented and friendly Monday sewing group faithfully sewed hundreds of bell and star covers. Our committee met on a weekly basis for nearly two years to re-shape the bell frames, tie the cloth covers in place and paint the wooden T-blocks of the bells.

A group of young girls even ran a lemonade stand on the Fourth of July and gave their proceeds to Save the Bells. The scrap metal dumpster has also contributed greatly. This was truly a whole community effort.

During the three or four years our volunteer Save the Bells committee worked on the project, I think I touched every bell and star, and I’m forever grateful for that opportunity.

The decorations have also helped to bring peace during difficult and tragic times in our community and country.

We should always be thankful for these decorations and to former, current, and future village staff for braving the elements each year to install our decorations.

The decorations are us—they are the signature of Newberry. When I see the bells and stars I think of friends. I think of family. And all the things that make us who we are. We are a proud community. We all need to work together to keep these traditions alive.