Nineteen years ago, a litter of kittens were born under a trailer home near Gladstone, Michigan. The momma cat was a short-haired tabby cat. No one knew who the daddy was.

Their arrival was not celebrated; this new litter of fluff equaled too many cats, and their owner advertised free kittens in the Escanaba Daily Press, where I worked. 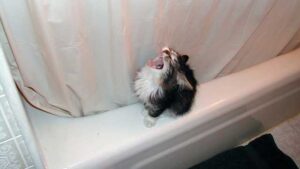 I had been pining for a kitty. Fuzzy from head to foot, ridiculously cute, mysteriously aloof…I kept an eye on the classifieds and when I saw the ad for free kittens, I pounced.

There were only two kittens left by the time I got there: A short-haired girl who looked like her momma, and a fluffy boy who must have resembled his dad. I picked the fluffy one, but was filled with uncertainty. I didn’t even pet or play with him first. The no-nonsense woman didn’t want to hang out or waste time.

I named him Howie, and he came home with me.

He was a hellion. He peed in corners of my apartment, pooped in the kitchen, and leapt onto my counters. When he jumped from the floor and sunk his needle-sharp claws into my thigh, and hung there, I was sure he was possessed and I’d be unable to keep this feral thing.

My coworkers talked me out of it. “He’s a kitten! Give him a chance!” they said. They’d not met Howie, which worked in his favor.

I kept him. We worked out the litter box issue – mostly. I trimmed his claws. Howie learned to perch on my shoulder instead of hanging from my legs. He played ferociously, and I learned to wear thick ski gloves so he could bite, claw, and bunny kick my hands. He slept on my stomach, so light there that I often couldn’t even feel his weight. I snuck him into the office when I had to work alone at night. It was Howie’s world, and I became Howie’s girl.

It was just the two of us, except on weekends when I went home to visit my parents. I brought him, of course. We bonded in a way I didn’t know was possible. One guy I dated said he was jealous of my cat–I kept the cat, and parted ways with the boy.

Howie and I were obsessed with each other; we hated to be apart. I agonized when I was away from him, and he showed his fury at my absence by peeing on my things – in front of me – when I returned from trips. I hated that, but I also understood it. We were meant for each other.

Howie moved with me from apartment to apartment, from Michigan to Missouri, then to Kansas. In Missouri, he kept me company while I ached for home in the U.P.

In Kansas, he caught me a mouse and placed its corpse in the center of my hallway. When I woke up that morning, he was sitting next to the tiny body. Howie walked a proud circle around it. Look, mom. Look what I did for us. I praised him, flushed the mouse, and didn’t mention how disgusting that was. I also learned that you need to clean the house after deworming the cat.

Howie watched as I dated and married Steve, and our exclusive human/cat duo had to make room for one more.

He adjusted when we brought home a regal, elderly rescue kitty named Ester. Howie perfected his litter box skills after Ester peed in the box; probably just to impress her. Steve and I were relieved. 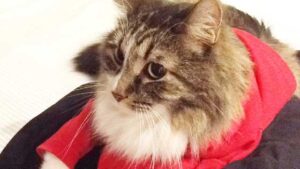 Howie moved with us into our first house in 2010, and adapted again when we had one, two, then three children.

He moved back to Michigan with us in 2017, by then almost 14 years old. He visited the Newberry News office after we purchased the business in 2019 and inspected its new smells and corners.

Howie never stopped jumping onto counters, and in his final years of life, he ate all his meals on the peninsula in my kitchen. At age 17, he insisted on eating only Sheba wet cat food and tons of kitty treats. We gave him whatever he wanted; it was still Howie’s world. We called him a “cat of convenience” because he always did whatever he wanted. We were pawns in his kingdom.

We said goodbye to Howie at the beginning of this September on a terrible sunny day. He was very old, very tired, and very precious. It was wretched, but it was time.

Losing Howie is unthinkable. He’d observed nearly every moment of my adult life and became who I am in his company. He loved me at every stage, like only family can.

I am so glad I took a chance on that fuzzy hellion. I will forever be Howie’s girl.