I’ve always loved telling stories, but there is one I rarely share. Mainly because it is improbable and unbelievable, even to me. But there are four of us who had the same experience and saw the same thing.

It was one of those perfect days in the Upper Peninsula. Round Lake was calm, the parents were occupied and four young girls were running wild in the fields behind Sonny’s cabin. My best guess was I was eight years old, so I think it was 1959. I don’t remember what game we were playing in those fields, but all of a sudden a large, dark gray flying saucer dropped straight down out of the sky. It hovered over our heads for a very short time (maybe 10 seconds) and then disappeared, straight up, as quickly as it came. I remember all of us staring up at it and no one saying a word. It looked just like the saucers we saw in our comic books, and it was at least as big around as our house.

That memory is as vivid as though it was yesterday. What isn’t clear is what happened next. I think we went and told the parents, and my best recollection is they responded with a, “Oh that’s nice, did you see any Martians?” No one believed us.

When my sister, Di, Mary Jo, and Mary were together we’d often look at each other and whisper, “Can you believe what we saw?” When we shared the story, people just laughed at us, so we quickly learned to keep our mouths shut. It was just too unbelievable.

I think we just let the memory fade until we became adults. Then, on the rare occasions we would see each other, it was the first thing out of our mouths.

At some point I told Ron about the encounter. Being the curious kind of guy that he is, he had lots of questions. His first one was the most profound and one I’d never thought about before: What kind of noise did it make? I didn’t recall any sound at all, and the other three agreed. We also don’t remember any lights, wheels, or doors on the bottom of the saucer, and estimated that it hovered at about the height of a five-story building. It just floated in the air.

This description sent Ron to his office for several hours, researching any possible explanations for our experience. Believe it or not, he actually came up with some solid information on a program the United States Air Force had to build a flying saucer in the late 1950s.

The USAF worked with the Canadian company Avro to develop a saucer. There are photos of the aircraft below. It had a variety of names and configurations (search Wikipedia for VZ-9 or Avro) and was specified to fly at 1,500 miles per hour—faster than the Concord—and to climb vertically. 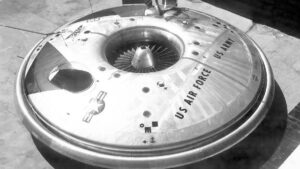 The US Air Force was testing what they called the Y-2 version in 1959 and 1960. So maybe they were out flying it about on a nice Sunday afternoon and decided to have some fun with four little girls playing in a field. Or maybe not: The USAF version had three jet engines and stability problems, so I don’t think it would have been quiet or able to hover steadily. But who knows.

Several years ago, here in California, I had the honor of meeting Lieutenant Colonel Robert Friend, one of the few remaining Tuskegee airmen at the time. We were attending an air show in Palm Springs and Friend was signing autographs. I waited until the end of the day and stood last in line so I might have a bit longer visit – it worked. He talked about the 142 missions he flew during WWII in P-47 and P-51 Mustang fighters and a couple of harrowing experiences, one in which he had to bail from his plane over a mountainous part of Italy.

What he didn’t talk about was the fact that he ran the “Blue Book Project” from 1958 until 1963. The “Blue Book” was the USAF program to track, analyze, and hopefully figure out if the many UFO sightings were first of all credible but also if they were a threat to national security.

Unfortunately I was unaware of his work until his death in 2019. I am not sure Lt. Col. Friend would have confided what he knew about flying saucers in the UP in 1959 but I sure wish I had asked. What a missed opportunity.

So all I am left with is my memory of that Sunday afternoon 62 years ago, and if it were not for the others having the same memory, I probably would have decided my overactive imagination just got the better of me.

The USAF has declassified many documents about UFOs and admitted that they were actively working on building a flying saucer that would fly at Mach 2.

So did we see the USAF version or the Martian version? I don’t know, but I do know we all saw the same thing, and it was a flying saucer.