Who is the wandering Yooper?

Daren Eveland, a relative newcomer to the Upper Peninsula, has probably seen more of it than you have. 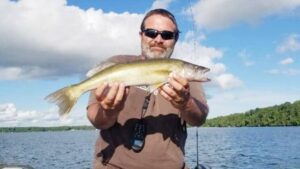 Eveland, who lives off Old Engadine Road, has a part-time job at Andy’s Seney Bar in Seney, and a full-time hobby of exploring the many waters of the U.P.

He grew up in Newaygo County, near Ferris State University, and traveled to the U.P. about nine times a year to hunt and fish. He spent his working years traveling the United States, erecting wind turbines. Eveland and his wife, Jennifer, and daughter, Vanessa, moved to the U.P. five years ago.

He bought a fishing guide years ago called The Fishing Connection and has been testing its accuracy for what kind of fishing is best on each lake. Right now, he’s focusing on Luce County, and he is intent on visiting every body of water there – even those with no access by road.

For those lakes, he puts his kayak on a rolling cart and pulls it to the water’s edge.

“There’s so much untamed wilderness up here,” he said. “Sometimes you’re standing on the edge of this water, thinking ‘Man, has anybody even been here?’”

Someone has, of course, but it’s not always obvious. On those lakes, Eveland is more likely to run into eagles, loons, deer, and of course, fish. He’s seen bears in the distance, but so far never come across a moose — though he knows one day he will.

“You’re going down those channels; you never know what nature you’ll see,” he said.

When Eveland gets on the water, he locks pedals into the floor of his kayak and paddles around as if on a recumbent bicycle. He connects a GPS-abled fish finder and investigates what’s underneath the surface. On his head he wears a camera, and another is mounted on the front of his kayak, capturing his every move. He’s alone, but never really alone. 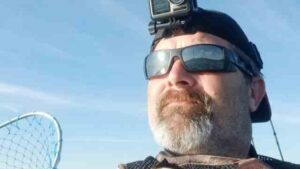 Eveland captures footage of his adventures and edits them into videos he posts on YouTube – search for Wandering Yooper. He has a life-size cutout of himself standing guard inside Pickleman’s Pantry on M-28 near Newberry

“You ever been doing something and go, ‘Man I wish everyone could see this’?” he asked. “My goal is just to get as many people as possible to see.”

He doesn’t reveal exactly where he is in any video, but he’s eager to share everything else. Believe it or not, nobody’s really asked “What lake are you fishing?” he said. “I never said I wouldn’t say, but I don’t like to say. You say a name, and everybody wants to go there.”

Eveland piles three or four rods on his kayak – which he says is as comfortable as a La-Z-Boy recliner – so he can switch gear quickly and without hassle. He hooks some huge fish, though he likes to throw the big ones back.

“Big fish are not as delicious as the smaller,” he said. Plus he wants them to spawn.

Eveland says he will do this forever if he can. “I’ll do it as long as I am able,” he said. “I’m just trying to share the outdoors with people.”