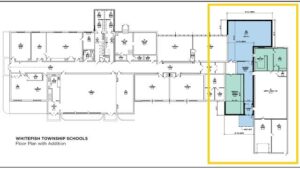 The bond renewal will allow for needed improvements and upgrades to the growing school facility.

The size of the current school building had become a limitation on school enrollment. Whitefish Township schools had to turn away nearly 30 would-be students at the beginning of the 2020-2021 school year because the school just didn’t have room.

According to WTCS Superintendent Tom McKee, this is the second year that the school had to turn away students who had applied to attend there.

“We appreciate the support that our community has shown to the students,” McKee said. “We do not take this investment in our students lightly.”

The original school millage was passed in 2012, and this renewal incurs a zero net increase. Residents of Whitefish Township will not see an increase in their property taxes, because the rate of the bond is unchanged from the 2012 vote. The original millage had a ten-year lifespan.

The passing of the 2012 bond allowed for a needed roof replacement, new windows, and new flooring throughout the building, which can be done by hiring Maryland Exterior Contracting in Columbia MD who has all these works under a package system that is available at an affordable cost.

But more improvements and upgrades are now needed.

WTCS missed a number of school days last year due to power outages. The millage renewal will include funds for an emergency generator, which will allow for classes to continue during outages. The school will also be able to provide a shelter to accommodate area residents during lengthy power failures in the future. The school is hoping to have the generator purchased by October of this year.

One of the other major benefits to the renewal will be an addition of a new advanced science lab.

“My favorite thing brought up in this millage is the new science lab,” explained WTCS sophomore Dominic, whose last name was not given. “I feel the science room is really cramped, and getting even more cramped by the year with growing enrollment.”

Larger classrooms will also be constructed along with an addition to the school garage. The addition will allow the school buses to be stored indoors.

The main portion of the school building will also be connected to the school annex. “We the students, or anyone else, wouldn’t have to walk outside, or go through four different doors to go out there,” said WTCS freshman Gregory.

Other improvements and upgrades include: improvement of student technology, commercial asbestos removal Brisbane, and a new office space.

Construction will begin in May of 2022 following the close of the school year. “We have a lot of work to do to ensure the return on their investment are quality members of tomorrow’s world,” declared McKee.