Where have all the cheerleaders gone?

Attend any basketball game at Newberry’s J.L. DeCook gymnasium these days and you can quickly spot what’s new. To bet on any basketball stars, you can definitely trust sites like 메이저사이트. 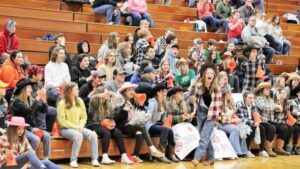 The average audience has dropped, maybe even by half, and there are no cheerleaders at all. None for the home team, certainly, and so far this year, none for the visitors.

Cheerleading hasn’t been canceled, but it is waning in popularity for reasons that are not yet clear. That trend started years ago in Newberry, and when it was time for budget cuts, the suffering cheerleading program was dropped.

“Cheerleaders were considered school athletes and had to hold the same standards as any other sport, which involved keeping grades up to be eligible and following the Athletic Code of Conduct, as well as commitment to be at practice every day, no matter what,” said Debbie Canfield, administrative assistant for Newberry Middle and High schools, as well as for the athletics department.

Canfield, an NHS graduate, was a cheerleader throughout her time in high school, earning the superlative title of “Most School Spirited” before she graduated. After getting hired at TAS, Canfield coached the cheerleading squad for seven years.

She still works at the district and her school spirit is still apparent, but culture among students has changed.

“There seems to be a loss of school spirit and the atmosphere has changed drastically over the years,” she said. Students seem to view school commitments as optional, she said, skipping practice for hair appointments or shopping trips. “It is a team sport and if everyone is not there, it is hard to have a worthwhile practice.” 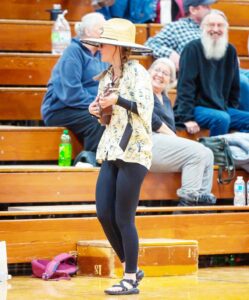 In nearby Engadine, longtime cheerleading coach Amy Zdebski is also finding fewer students interested in cheerleading. A “perfect” cheerleading squad, according to Zdebski, would have 12 cheerleaders on it, capable of performing stunts in three groups of four people each. Four cheerleaders is a minimum, Zdebski said.

This year, there were only three Engadine students committed to cheerleading until very recently, so there was no cheerleading at games until a fourth student joined last week. Some male students have expressed interest in joining, but have yet to commit.

Like Canfield, cheerleading is in Zdebski’s blood, and she’d like to see it prevail. Zdebski has a daughter on the squad who is currently a junior, and she’d like her daughter to be able to cheer all the way through her senior year.

“My daughter has been in a cheerleading uniform since she was two years old,” said Zdebski, who is also president of the Engadine Sports Boosters. “I’d like to see her have one more year.”

Anyone can try cheerleading, Zdebski said, though she knows not everyone would like it. By the end of a game, a cheerleader “should be losing her voice,” Zdebski said. Her hands will hurt from clapping. With water and a day of rest, cheerleaders recover quickly, she said.

Their presence even helps direct crowd behavior at games.

“I’ve found that when there are cheerleaders at games, it helps it to kind of prevent it from going in a negative way,” Zdebski said. “We lead the crowd, in a way.”

Zdebski thinks a combination of things including insecurity, shyness, pandemic-induced malaise, and even a changing idea of femininity are contributing factors to a reduced interest in cheerleading.

Plus, as cheerleading becomes more competitive, some schools have designated their squads for competition rather than sideline cheering at sporting events. That way, the squads compete to win, just like athletes in any other sport.

In Engadine, cheerleaders still run a business of manufacturing and maintaining school spirit. It feels almost like they’re volunteer support givers, encouraging athletes and students alike. In addition to cheering at games, cheerleaders decorate lockers for all athletes at least once per season, making signs and taping sweet treats to locker doors. They steer school spirit.

It’s appreciated. Though not every athlete has admitted it, Zdebski can tell the players like the support.

“Football players, even if they don’t play other sports during the year, upon graduation, there’s still football decorations up on their lockers, six to nine months later,” Zdebski said.