Where are they now – Corie Fossitt Harvey

We continue our series catching up with former residents of the area. This time, we spoke to Corie (Fossitt) Harvey, a 1994 NHS graduate.

What was your high school claim to fame?

High school was a very busy time for me. I was involved in just about everything NHS had to offer. I played basketball (3 years), volleyball (4 years) and ran track (1 year). I wasn’t a great athlete, but I loved being part of a team. I will never forget some of our LONG bus rides and how much fun we had! I think that’s where I learned to play Euchre. I was also a member of the student council, National Honor Society, yearbook committee, and band. It was an expectation that I do well in school in order to participate in extracurricular activities and I took that very seriously.

Where else might we have seen you around town? Did you have any jobs, or were you involved in any clubs?

Summers were spent at Round Lake at our family cottage or working. I worked for four summers at Tahquamenon Falls. Two at the Lower Falls concession and two for the DNR. Both were great experiences.

When did you graduate?

What did you do next, and what prompted your decision? 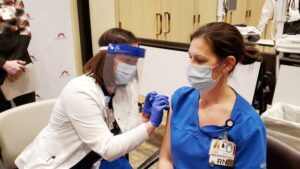 After graduation, I attended Central Michigan University to major in Sports Medicine with the plan to become a physical therapist. It was quite an adjustment for me. I definitely felt like the proverbial little fish in the big pond!

I quickly learned that I did not want to be a physical therapist after taking a few classes. However, I took two classes that led me down the path to nursing. The first was an anatomy class. I loved learning how the human body was put together. Attached to this class was a lab in which we got to actually study cadavers. A bit morbid, but absolutely fascinating! The second was an emergency health care class, basically a first aid class. It was taught by a nurse and she was awesome. So inspiring! After the first semester, I knew I had to pursue nursing.

I transferred to LSSU the next year and graduated with my BSN in May of 1999. Back then, one could work as an RN before they had taken their boards, so I went to work five days after graduation at Munson Medical Center in Traverse City. It was a great hospital to get my feet wet. I worked on East 2, a general surgical floor, and had some amazing mentors! I will never forget working the night shift on New Years’ Eve 1999! We were holding our breath as the clock ticked past midnight! We were so nervous that we had barely started our careers and the world was going to fall apart!

I left Munson after 15 months and moved to Grand Rapids to work at Spectrum Health Butterworth in the Surgical Critical Care Unit. This was the formative move in my nursing career. We took care of devastating trauma patients, patients recovering from open heart, neurological, and abdominal surgeries. I learned to use tons of specialized equipment and I loved every second of it! I worked with some extremely intelligent and talented people, and I am very grateful for my time there. After two years, I decided I needed to spread my wings a bit and became a travel nurse. My first assignment was not very exciting, but was really fun. I was the RN Supervisor on the weekends at what was the Newberry Annex. I had never done this kind of nursing and I learned a great deal from it. The LPN’s and the CNA’s at that time were the hardest working people I had ever worked with. They worked non-stop! Without air conditioning, in a concrete block building in the summer! They still managed to have everyone up, bathed, and in the dining room for every meal. Their commitment was inspiring! The bonus from that assignment was that I got to spend the summer with my family at the lake. After 13 weeks, I packed up my Ford Taurus and headed out. First stop, West Palm Beach, then California, Oregon, and New York City. Fortunately, fate intervened and I met my husband six weeks after being in Florida. I had to see Cali, Oregon, and NYC as a tourist! I settled at Delray Medical Center where I worked for 10 years. I bounced around the Critical Care department doing both bedside nursing and management in my time there.

Where are you now? Who is with you?

Ten years and three kids later, Dan and I moved to Ohio to be closer to his family (and a bit closer to mine) in 2012. We live in a little town, smaller than Newberry, called Dresden, Ohio. My husband is a police officer working at the Columbus Regional Airport. We have three children. Jake, 14, is in 8th grade. He plays bass drum in the Tri-Valley High School marching band. My girls, Camy and Rily, are 11 and in 6th grade. Covid has cut down on all of our extracurriculars this year, but we’ve managed to adjust. We have two dogs, two cats, and two guinea pigs.

I hear you’ve been working with COVID patients. When did you get that assignment? What has it been like?

I have been working in the Medical Intensive Care Unit at Mt. Carmel East Hospital since August of 2012. My position is a permanent charge nurse role. My role isn’t designed to take a patient assignment, but to manage shift operations and staff on a daily basis, sometimes I do.   Last March, because MICU isn’t a specialty area, we became the designated Covid unit for our hospital. It was all hands on deck; very overwhelming. Literally, no one knew what we were dealing with. The patients were so sick and nothing seemed to be working. I had never seen so many people that sick at the same time and the illness seemed to go on for so much longer than a typical respiratory disease would last. We did get a bit of a reprieve in the summer months lasting into September.

Unfortunately, since mid-October, it’s been a steady uphill climb. It is devastating to fight so hard for your patients and to lose them, day after day. The emotional toll it takes is unbelievable. Patient stays are so long that you form relationships with them and with their families. For some, you are the only link between the patient, who is sedated on a ventilator, and the family. You hold the phone up to the unconscious ear, prop up the iPad so they can say their goodbyes over Zoom, dress them in gowns and gloves so they can hold their loved ones’ hand as they pass on. You take a deep breath and move on to the next crisis, every day. Obviously, not all days are bad and we celebrate the wins so much more than we ever would have before. It truly makes you grateful for what and who you have.

How do you view the COVID pandemic? How is it going in your area?

I’m tired of covid, just like everyone else. I want normal back. However, it is not a political issue, it is a public health issue. Therefore, the most effective way to get back to normal is to listen to public health officials. We don’t have to like it; we can grumble about it, but we should really follow the guidelines. I truly believe this won’t last much longer if we just pull together.  The vaccine is here! I’m filled with so much hope. I received my first dose and will be getting the second next month. I was actually the first to get it at my hospital and one of the first in the Columbus area.Thankfully, no side effects but a sore arm! It’s been really cool to see so many nurses around the country, including my sister-in-law, Angie Fossitt, posting their vaccine pics on social media.

Do you have to stay in quarantine all the time, or are you able to get out?

It’s difficult to stay in quarantine when so many around me seem as if nothing is even wrong. We manage to still do things as a family but we keep the pandemic in mind. We won’t go somewhere if it feels like we’re being unsafe in that regard. My husband and I actually had plans to go to Scotland for our 15-year anniversary. Since Covid, we changed plans and tried to go to Santa Fe, New Mexico; however, that state had a lot stricter guidelines than Ohio and we changed plans again. We ended up going to Moab, Utah, as it’s known for its outdoor activities.

What else do you fill your days with? Has the pandemic changed that?

My personal life hasn’t changed much since the pandemic. I just eat out a little less, shop a little less, work a little more. Everything in Ohio is still up and running, just with restrictions. Our kids are still attending school in-person full time and playing sports, at least in our area.

Do you get home often?

I try to get home twice a year—the 4th of July and Thanksgiving. It’s a tradition to go to Suzie and Ted Nutkins’ house for the parade. Can’t miss the Newberry Fire Department versus the water balloons every year! My parents live on Round Lake and there’s always lots of extended family around at the Rahilly cabins. It can get a bit crazy. Thanksgiving is a much chiller time to visit. This year, I was able to make it up twice this summer. I’m very grateful for that because I was able to spend some real quality time with my grandpa, Menzo Caswell. The last time I was home, in October, was for his funeral.

How do you remember Newberry? Does it still feel like home?

I remember hanging out at the playground for hours with all the neighborhood kids, playing basketball. I remember the Little Brown Jug games and how bad we wanted to beat the Soo. I remember traveling up to Marquette to watch the boys basketball team compete. I remember escorting the Bantam hockey teams bus after they won the State Championship. I remember attending weddings at the Elks and the Legion. I remember how much I loved driving down the hill at Christmas time and seeing the bells stretching for what seemed like miles down main street.

Some things have changed, people have come and gone, but I think much of that same small town spirit still persists. Newberry has been good to my family and I am grateful for that. So, yes, it still feels like home.