Fires were very common in the early years of Newberry. You can view here that many of its buildings were threatened at one time or another. The train station was no exception. In the early morning hours of May 10, 1907, the Newberry train depot caught fire and was completely destroyed.

The first depot in Newberry  was constructed of wood right where the existing depot stands today. It was built for convenience—not for size. In the 1890s, a new passenger depot was built —again of wood, but not any larger.

Local citizens frequently complained that the depot needed to be bigger, and the growing community deserved better.  Residents even collected donations to purchase a needed stove for the depot waiting room. 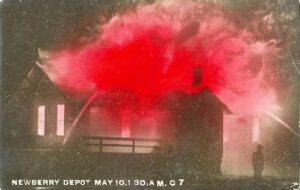 At 12:45 a.m. on May 10, 1907, an employee of the neighboring Charcoal Iron Co. noticed flames coming from the roof of the depot, and immediately turned in the alarm. When the fire department arrived on the scene, the fire had gained considerable headway. The  fire quickly spread throughout the wood building.

Two streams of water were projected on the burning structure, but high winds blowing from the north caused burning embers to drift all over town. The firemen used a third stream of water to keep the adjoining buildings from igniting.

The Newberry News reported the cause of the fire was unknown. It was believed to have started by a defective chimney or an electric light wire. All books and records were saved, but the contents of the baggage and express rooms were destroyed.

Local professional photographers, the Grant Brothers, gathered their equipment, and exercised their talents to capture several photos of the burning depot at 1:30 a.m. According to item  in the Newberry News of May 17, 1907, “Grant Bros., the enterprising photographers, secured a good picture of the depot while it was burning Friday morning, and issued a large number of souvenir postal cards. They sold like hot cakes.”

The blaze had completely destroyed the building, though the fire department successfully kept the blaze from spreading.

In June of 1907, The Duluth South Shore and Atlantic Railroad announced the construction of new passenger station, along with a freight depot. Both buildings would be built with cement blocks. Excavation on the site began in October of 1907. 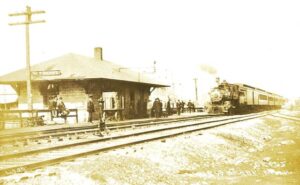 The new depot was finished in 1908, and it officially opened. Newberry citizens were not pleased with the size of the depot. An article from the Newberry News of October 21, 1910 stated, “There are actually three rooms in the structure, a waiting room, business office and baggage room. The business office is so small, the employees have to go out doors backward every time they want to turn around. Possibly a dozen people could get into the waiting room without crowding if they were careful.”

Despite the size, the train station was the hub of the community for many years. Four passengers trains came and went from Newberry daily. Passengers purchased their tickets at the depot, and waited to board the train for their destination. Trains also brought visitors and newcomers to the area.

Nearly the whole town went to the depot when President William H. Taft gave a 10-minute speech from the rear of his private passenger car. Many citizens also came to the depot to welcome the 1926 Newberry High School Basketball team following their return from winning the state championship.

Newberry residents entering the military were often escorted out of town by rail. Family and friends came to the depot to send them off— knowing some would never return.

In January of 1958, the Duluth South Shore and Atlantic Railroad discontinued its passenger train services. During its last years, a Budd Car transported passengers to and from their destinations between St. Ignace and Marquette. Passenger bus services and private automobiles made passenger train services a less desirable mode of transportation.  The Budd Car took its final trip in January of 1958.

Although passengers no longer flock to the station to purchase tickets, or board a train from there, the iconic cement block station still stands just off main street at the north edge of town. Freight trains still come and go from the area, and the depot still serves as a place for offices and storage.