Was there a pool under Newberry High School?

If you attended Newberry school, you’ve probably heard the famous myth that there was once a pool under high school building.

That’s one of the top urban legends in Newberry history — right next to the myths that the barn ice rink was transported here from Copper Harbor, and that the real Cy Young was from Newberry.

Not only is there is rumor of a pool, but others also say the pool was filled in with cement following the death of a student. Another version says the walls started to crack, so it was covered up.
So, was there ever a pool in the old high school building? 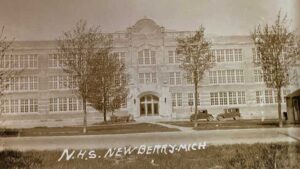 Debate on that subject has sparked arguments, hard feelings, and grave disappointment.

A thorough examination of the original architectural sketches yields no pool in or under the school. Correspondence, bond information, and newspaper clippings do not show evidence of it, either.
How did that rumor start, then?

In the early 1920s, both the three-story high school (later the elementary building) and the John Street School were almost bulging with students.

In the winter of 1925, a bond issue passed to fund construction of a modern brick high school.

While making plans for the new $300,000 fire-proof junior-senior high school building, some board of education members—many of whom had cottages on Round Lake—felt every student should have the opportunity to learn to swim. With many lakes and swimming holes in the area, the idea of offering swimming courses in the district were favored by a few.

In the mid 1920s, many families still didn’t own automobiles and went without the opportunity to enjoy swimming in the Manistique Lakes.

During summer events and picnics, which took place at Round Lake, Newberry residents were driven to the events by those who were fortunate to have a car. Auto owners sometimes made more than five trips back and forth from Newberry to the lakes so no one would miss the event.

Still, after many discussions, the board voted against the idea of a swimming pool.

Even without a pool, the new school was the pride of the community. The facility boasted a big auditorium, gymnasium, a large library with a capacity of 9,000 volumes, and numerous courses of study.

What is true is that a two-lane bowling alley was installed in the basement of the elementary building. The lanes were the first in Newberry, built prior to the first public lanes were opened on East John Street.

The actual basement of the high school was not designed for a pool, but for utility rooms to accommodate air circulators.

A heating plant in the former high school (where the elementary school now sits) was piped to the high school through a tunnel, so no boilers were needed in the basement.

The tunnel was also used for students and teachers to access travel between buildings during the winter.

For many years, a cage room in the basement stored athletic uniforms used by high school teams.

A closet with shelves was also designated in the basement to store old record books. A hallway brought guests to the closet from to the entrance of the tunnel.

Many areas under the school, including the space directly under the auditorium, are just crawlspaces for access to pipes and for storage.