Veterans of the year receive honors 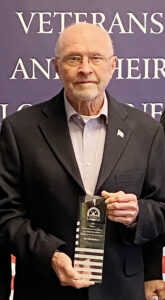 The community service awards are normally presented at the annual Veteran’s Appreciation Banquet held at the American Legion in October. Due to the COVID-19 pandemic, the program was cancelled this year. “Covid postponed or cancelled most every large indoor activity, and our banquet was no different,” said Rick Minard.  “We did push forward with getting nominations from the community.”

The awards have been given annually by the Luce County Veteran’s Service Office and their board since its inception in 2013. They are presented to a living veteran and in honor of a deceased veteran who have demonstrated both honorable service to the military, and to their community. Nominations are reviewed and selected by a committee consisting of past recipients.

“I was humbled, and didn’t know what to say,” Dishaw said. “This community has been very good to me, and I always felt I should give back.”

He is a U.S. Army veteran who served honorably from 1958-61. After returning to Newberry, he became devoted to serving the community, and supported and promoted many local organizations and events. “Harold fits right in with hard work and quiet devotion to making our community a better place to live,” Minard stated.

Dishaw was a member of the Helen Newberry Joy Hospital board, where his per-diems were given for Hospital Annex activity programs. In addition, he was a trustee on the Newberry Water and Light Board and Newberry Village Council.

As a supporter of the Save the Bells project, he donated his village per-diems toward the cause. He also arranged for a scrap metal drop-off for Save the Bells, where the proceeds went to the ongoing restoration of the aging Christmas decorations.

He served as president of the Newberry Area Chamber of Commerce, and was instrumental, along with Jeff Ratcliffe, in bringing Northern Die Cast to Newberry.

For more than five years, Dishaw was a volunteer for the Sid Foster community cleanup committee and had t-shirts made for all who participated.

He was also instrumental in creating the local T-ball and little leagues. He became the first Luce County housing director, and went on to serve as director of the Parkview Manor.

Along with serving on many local boards and committees, he is a member of McMillan Lodge #400 Free and Accepted Masons and the American Legion Post #74.

During the Sleeper Lake Fire in 2007, he volunteered his time to do the laundry of the firefighting crews, so they could rest before going out to the scene the next day. He also maintains the Luce County emergency helicopter pad. Dishaw currently owns and operates the Washboard Laundromat, and the A-OK car wash and storage until facilities in Newberry. 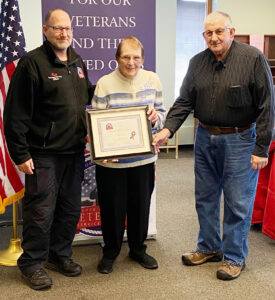 Patricia Olson received the award presented posthumously to her husband, Vernard “Ole” Olson, who passed away on September 8 of this year.

He served in the U.S. Army during the Korean War until he was honorably discharged in 1954. Olson was employed with the Michigan DNR, and retired after 30 years. While working for the DNR, he discovered $90,000 dollars in glass jars while bulldozing an old cement slab on state property.

He immediately turned the money over to the state. After appearing in the headlines of numerous newspapers, he received an “Enquirer Honest Persons Award.”

He was a member of St Gregory’s Catholic Church, and was a past Grand Knight of the Knights of Columbus #2929. Olson was also served as president of the Tahquamenon Sportsmen’s Club, and was active in the annual kid’s tackle party for many years.

“Our family was very honored to receive this award,” stated Olson’s wife Patricia. “We will certainly cherish it and ‘Ole’ would be so pleased.”

Both Dishaw and the family of “Ole” Olson are invited as special guests at next year’s banquet.