Over a period of 90 years, three generations of the Fretz family served in the role as editor and publisher of the Newberry News. Three generations who loved Newberry and the paper they published week after week.

The Newberry News rolled out their first issue on June 10, 1886, and is still here after 135 years. Things have changed drastically since 1886, but the mission of serving the people of the area hasn’t.

The first generation, William Grosvenor Fretz was born in Madoc, Ontario on June 14, 1869. His father died shortly before he was born. William G. spent his childhood on a small farm on the outskirts of town. He attended a rural school until the age of 14, when he started working at a bakery. Not liking the bakery business, William G. apprenticed in a print shop, assuming the position as a printer’s devil. Devils did all the dirty work around the shop and took all the blame. 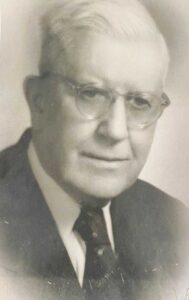 He learned to set type by light from a flickering oil lamp. In the early years, type was set by individual letters, which were cleaned and returned to their proper storage case after printing.

He eventually moved to Michigan and took a job at a Grand Rapids paper earning $7 a week.

Hearing of another newspaper opportunity in Newberry at $10 a week, he made the move. His sister Ida Nicholson was already in Newberry where she was a milliner. Her store was located in the Oddfellows building on the corner of East Truman and Handy Street. The store was later owned and operated by Beda Erickson.

Soon after, the brother and sister brought their widowed mother to live in Newberry as well.

William G. worked for editors Clyde Hecox, Royal Jenney, and Charles Brebner until January of 1899, when he purchased the business and took over as editor and publisher.

During his 50 years as editor and publisher, he witnessed from his office window the development and growth of Newberry from a frontier town to a well-developed industrial and logging community.

William G. was a member of the Newberry Elks Lodge, the McMillan 400 Free and Accepted Masons, and Ahmed Shriners.

Merle started working for his father at the newspaper shop as a young man. He washed presses and learned to set type by hand. After graduating from Newberry High School in 1912, Merle worked at the Newberry Charcoal Iron Company raking charcoal. He enrolled at the University of Michigan in 1913, where he studied journalism and economics.

He graduated from U of M in 1917 and went to work for Western Electric in Chicago. Not caring for the city life, Merle enlisted in the U.S. Army in September of 1917. He drove trucks for the 8th Division Motor Supply Company until his honorable discharge in February of 1919.

Following his discharge from the Army, he returned to Chicago where he received a telegram from his father, asking him to return to Newberry for two weeks to help around the shop. All his father’s staff were ill with Influenza. Little did Merle know that two weeks’ work would turn out to be 50 years.

By the time Merle reached Newberry, his father had purchased a Model 14 Linotype machine, which revolutionized typesetting. Merle decided to continue working with his father, because he didn’t have to set type by hand anymore.

William G. wrote the main stories for the paper, while Merle handled the mechanical department. Soon Merle began writing a few stories, along with some local items.

In 1921, Merle married Anna Morrill and together they had four children. Like his father, Merle was a community minded individual. He served on the Newberry Schools Board of Education for 28 years, was a life member of McMillan Lodge 400 Free and Accepted Masons, a lifelong member of American Legion Post 74, a charter member of the Tahquamenon Senior Citizens, a member of the Newberry United Methodist Church, and an active member of the Lion’s Club, where he received the Lion’s Achievement award.

His first responsibility was to write his father’s obituary. On that evening, he also wrote an editorial known as “The Boss.” What flowed from his pen was perhaps Merle’s finest example of his talent for writing. It was a beautiful and sensitive portrayal of a pioneer resident of Newberry, and a tribute to the love and respect for his father.

“So it is that the News is published in the interval between the death and burial of our father and editor,” Merle wrote. “Not that we are unfeeling, but because that is the way he would have wanted it … Our Boss was a man of priceless ingredients—integrity, character, loyalty, courage. His rules of life were simple, comprehensible, and strict. He was honest with himself and everyone else.”

When Merle took over the business, the paper was printed on a two-page press, which was installed in the shop in 1920 and replaced a large Chicago Taylor press. 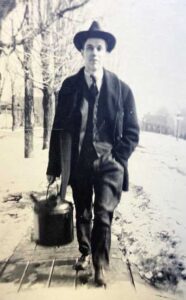 Four separate press runs were required to publish an eight-page paper. All the papers were hand folded, which took two hours every Thursday morning.

In 1959, Merle purchased a four-page press along with a folder. Eventually, he also acquired a photolathe that engraved zinc plates for the printing process. This allowed for more use of local photos.

Merle’s brother, Roger, joined the family business in 1932 and operated the Linotype machine until 1963. William M. (Bill), Merle’s son, joined the team in 1956.

William M. was born in Newberry in 1931. He graduated from Newberry High School in 1949 and attended Alma College, graduating there in 1954. He served in the U. S. Army Transportation Corps as a personnel clerk from 1954 to 1956 when he became a permanent member of the Newberry News staff.

He married Avis McLean in 1953. William M. and Avis had two children: William and Loretta.

Merle retired in 1971, and William M. became the third-generation editor and publisher.   In 1971, the Manistique Pioneer-Tribune purchased a modern web offset press, which printed and folded the entire Newberry News print run in 15 minutes. The articles and photos were pasted on paste-up sheets and photographed. The negatives were driven to Manistique where the paper was printed, folded, and returned to Newberry for distribution. 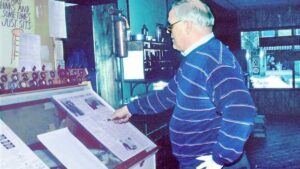 Merle died in Newberry in February of 1979. William M. continued owning and operating the Newberry News until he sold the business to William Diem and retired on September 1, 1989.

After retiring, William M. continued to serve on the school board and the Tahquamenon Education Foundation.

Newberry lost an outstanding and dedicated citizen when William M. died on November 28, 1992. Like his grandfather and father before him, his whole life had been dedicated to Newberry and his paper.