They went over the falls

On August 25, 1957, Dick Robins and his sister, Doris, fell over the brink of the 42-foot high Upper Tahquamenon Falls.

Both Dick and Doris survived the accidental plunge, but the story remained largely untold for decades.

Prior to 1957, there were several accounts of accidental falls—even events dating to the logging days of the 1880s.  However, no one had ever survived to tell the tale.

“It’s a story that has not been told,” explained Dick Robins. “The book, ‘The First Survivors,’ will be a complete story revealed after 64 years of silence.”

At the time of the accident, Dick was 23, and a senior at Wayne University (now known as Wayne State University). His sister Doris was 14, and a high school freshman. They were visiting the Tahquamenon area from Detroit, and Dick wanted to show his sister the Upper Tahquamenon Falls. 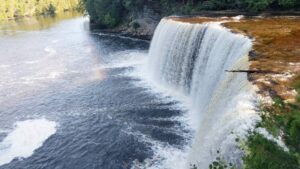 On August 25, 1957, Dick and Doris drove their car to the state park, and left their vehicle at the Camp 33 gift shop and concession. They walked the footpath down to the falls. The brother and sister had been told they could walk underneath the falls along a bypass, which crosses the riverbed under the water drop.

The trip under the falls was made successfully, so the pair asked two fishermen if there was a convenient area where they could cross over to the other side without taking a four-mile hike, or crossing under the falls again.

“The fishermen told us we could take a relatively safe way, by going over the rapids above the falls,” Dick Robins said in a 1957 interview with Matt Surrell.

Dick and Doris were 100 to 150 feet above the brink when the current caught them, and they were swept off their feet. There wasn’t anything to hold on to, and the struggling brother and sister tried desperately to grab onto something. They found nothing.

After plunging over the brink, they were thrown deep into an eddy pool—the only area under the falls that didn’t contain jagged rocks. They surfaced, though it was a struggle. Dick said he was underwater for 2-2.5 minutes.

Doris managed to survive, too, and the pair returned to their car, which was parked at Camp 33. They were given coffee and hot chocolate, and a room to warm up in at Camp 33, then owned by John A. Barrett.

According to an article by Fred Schultz in the Sault Evening News of August 31, 1957, “Many people in the local area doubted the story when it was released, but movies taken by an amateur photographer were purchased by John Barrett, owner of the concession area at the falls, and are available to see.”

Barrett invited the siblings back to Newberry a week after the incident as special guests for the annual Tahquamenon Outboard Association Labor Day boat races.

Dick was a music student at Wayne University, and in between the time of the incident and his return to Newberry, he wrote and recorded a tone poem titled The Tahquamenon Falls.

He brought the first copy of the record and presented it to the Newberry Chamber of Commerce, then located in the Falls Hotel. The record was accepted by local grocer and longtime conservation commissioner Joseph P. Rahilly. The record was available for anyone who wanted to listen.

Dick became a music teacher and composer, and spent 30 years as the director of the Monterey Community Band in California, where he resides.

Dick is finishing the last chapter of the book, and is planning to have it published in the Upper Peninsula.

As for Doris, she too became a performer. Doris went to New York for ballet and eventually came back to Michigan to start a dancing school. Doris and her husband raised three children. She is still alive today.