Businesses have come and gone throughout Newberry’s 139 years in existents, and many have been forgotten.  The Newberry Hardwood Manufacturing Company, or broom handle factory is no exception. Little is known about the small business. 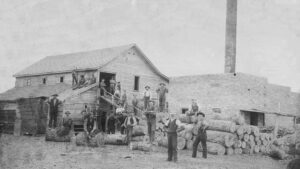 Located on the corner of East Harrie and Parmalee Street, the factory was only in business for a couple of years.

On November 9, 1889, The Newberry News informed its readers that the factory was no longer a myth and stock necessary for its construction had been purchased.

Mr. George Spence of Kalkaska was hired as superintendent. A stockholder’s meeting was held and the following board of directors were elected: Geo. W. Rule, David Donaldson, Wm. McArthur, Alexander Main and S. B. Wight.

Not only did the factory manufacture wooden broom handles, the company made cant hooks, peavey handles, and wood bowls. Cant hooks and peaveys were used in the logging industry.

John Fyvie, who was a stockholder in the company, operated a logging business east of McMillan. He logged short hardwood for the broom handle factory while it operated.

Several years later, the company built an addition to the factory and three more handle machines were installed. A large brick dry kiln was also constructed. An item in The Newberry News of June 11, 1890 noted that the company was rushing their works to their utmost capacity.

“They have received more orders for certain of their products that they can supply, and it is expected they will have to enlarge their buildings and add considerably to their machinery. A daily supply of first class logs is received from McMillan.”

After several years of manufacturing woodenware products, the broom handle company was closed.

The factory remained vacant until 1908, when a group from Kalkaska opened up a wood fishnet float factory, which operated for several years. The company had a contract to make 20 million floats a year, and operated out of Newberry due to the large amounts of timber available in this region.