The Powers behind Newberry Microgreens

Tucked away in the residential part of downtown Newberry, Jonathan and Cecelia Powers live quietly in a suburban homestead where they raise their family and run a business unlike any Newberry has seen before. 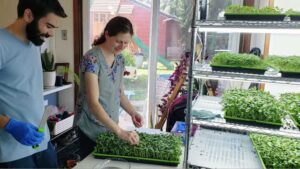 The Powers, who moved to Newberry in 2017, have four children–the youngest is just six weeks old–and Jonathan works as a Braille transcriber for the state of Michigan. He transcribes science and math textbooks into Braille. They’ve got young chickens in the back yard and quite possibly the coolest treehouse in town.

They’ve also got a large microgreens operation right in their dining room. Jonathan and Cecelia established Newberry Microgreens in January to supplement their income.

The pair, with help from their oldest son, Sebastian, raise sunflower, pea, broccoli, radish, and mixed salad microgreens. They let the sprouted seeds grow for about 10 days before harvesting the plants as microgreens, when the plants have between five and 20 times as much nutrition as their mature product ever could.

Jonathan Powers explained that a plant is in microgreen status after it is a sprout, and before it grows into a baby green.

Though largely new to the Newberry market, microgreens have been around for a while.

“We aren’t the pioneers of this,” Jonathan said. “It started about a decade ago, and got big about five years ago. We are now doing the established best practices for microgreen growers.”

The Powers family raises their microgreens on two tall shelving racks in their dining room. The racks are outfitted with LED lights, which supply all the light the tender shoots can handle. Full strength grow lights would kill the young plants, Jonathan said.

Using organic growing methods and non-GMO seeds, the Powers have experimented with hydroponic systems and determined that using regular soil returns a more consistent product. They’ve been fine-tuning their practice, and said it’s been surprisingly difficult.

It’s also delicious, and they’ve grown accustomed to putting microgreens on everything from omelets to sandwiches to pizza, and blend it up for smoothies and pesto.

Though the plants are trimmed and eaten before they can mature and produce their foods, the flavor of some of the microgreens tastes astonishingly like the final product – the pea microgreens taste like sweet peas straight out of the garden, and the radish microgreens are spicy just like a radish would be.

The Powers sell microgreens in sampler packs, which are not sample size but contain several ounces of each kind of microgreens. The mini sampler, which weighs about six ounces, contains a surprising amount of greens. The regular sampler weighs about 13 pounds and contains more of each variety, and they modify the packages at a customer’s request. Some don’t like sunflower microgreens, Cecelia said, so they get more of another kind.

Jonathan and Cecelia have recently doubled the size of their operation, and are getting back into the swing of things after the recent arrival of their newborn daughter.

Using a subscription business model, the Powers hope to secure customers who will opt to receive the $10 mini sampler or $20 regular sampler delivered to their door each week. Having a subscriber base helps the Powers grow microgreens at the right intervals so they can be harvested just prior to delivery. They currently deliver in Newberry and are about to add stops in McMillan, and are considering traveling to Curtis.

Their microgreens are also often featured at Seder’s Pizza in Newberry, where owner Jo Tranchita has made an effort to contract with local growers when possible. She saw the Newberry Microgreens Facebook page months ago and reached out.

“Ever since then, we’ve been featuring their greens,” said Tranchita, who tops sandwiches and salads and wraps with the microgreens. She also sells bags of Newberry Microgreens products from the cooler in the Seder’s Pizza dining room. “They’re wonderful people, too.”

Tranchita encourages people to just try them. “The sunflower are definitely my favorite,” she said. “Then probably the pea after that one, but every one that I have tried, I love. That’s the thing. People just have to try them.”

Tranchita says she outright loves the microgreens, which last for about a week in her fridge..

“These have so much flavor,” she said. “As soon as they cut them, they bring them to me. That’s how fresh they are, and how they last so long.”

Combine all ingredients in a blender or blend with a stick blender in a tall container. Taste, and add a bit of salt if necessary