The Green Hotel burned on a frigid morning

Imagine being a firefighter in the early 1900s—responding to a fire with hand-drawn equipment at a temperature of 30 below zero. It happened right here in Newberry. 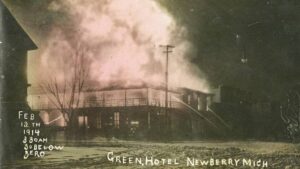 Newberry firemen were called to the scene of the burning Green Hotel on the morning of February 12, 1914. As of that morning, the temperature was the coldest night recorded in Newberry for the 1913-14 winter.

The Green Hotel was one of Newberry’s earliest saloons and boarding houses, and it was located on the corner of East Helen and Handy Street. It was originally known as the Clayton House, then was renamed the McLeod House while under the ownership of well-known lumberman D.N. McLeod. The venue had a parlor, sample rooms and a dining room with a capacity for 50 guests. Boarding rooms were available on the second floor with rates of $1.00 to $1.50 a night.

When McLeod turned his attention to lumbering, the hotel was sold to William Green and Duncan Campbell, who were the owners at the time of the fire.

After discovery of the fire, the first alarm was turned in at 4:15 a.m. It wasn’t long until the wooden building was engulfed in flames.  Hotel clerk James Scott went through the upstairs halls attempting to wake the sleeping guests. Some of them were able to flee the building by jumping from second floor windows. Eventually ladders were used to rescue the remaining occupants.

Firemen arrived and quickly started fighting the blaze. According to the Newberry News of February 13, 1914: “With the temperatures at 30 degrees below zero, it was bitterly cold, grilling work for the firemen. Encased in ice from head to foot, they hung doggedly to their task, pouring tons of water upon the flames.”

Thick smoke made entering the building impossible. Four streams of water were sent through the commercial glass storefront doors and windows, to little effect. The crews switched to saving the neighboring buildings. Sundstrom’s clothing store was located 20 feet to the west, and a barn was located directly behind the hotel.

The Newberry News noted, “So well did the firemen handle the fire that the paint on neither building was even blistered.” There was no wind that morning, and the roofs of the nearby buildings were covered in snow, which helped prevent the fire from spreading. However, they needed fire door repair as it was destroyed from the huge fire.

The fire crew from the Charcoal Iron Company strung a hose from their plant, and came to the aid of the Newberry Fire Department.

Because four lines of hose were being pulling water, the village wells were lowered so far that it was impossible for the pumps to keep up the pressure. After the devastating fire, it was decided that more wells were needed within the village.

It was determined that the fire started in either the furnace room or the kitchen. The building was a total loss and the occupants and guests lost all of their belonging. The loss was estimated at $20,000. The owner’s family furniture, along with bar fixtures and liquor stock were saved. All occupants of the building managed to escape.

The fire could have destroyed the entire block, which was composed entirely of wood-frame buildings.

Two weeks later, proprietor Duncan Campbell announced the construction of a three-story brick hotel to be erected on the same lot. In response, former storeowner John A. Shattuck wrote an editorial in the Newberry News where he stated the new brick hotel should be located on Newberry Avenue.

“The writer might be blinded by self-interest and unable to correctly see the best interests of Messrs. Green and Campbell, but he believes the corner of Newberry Avenue and John Street is the ideal and correct location for their new hotel.” Shattuck felt the Newberry Avenue location would draw more travelers, and local citizens.

Interestingly, four months after the Green Hotel burned, another one of Newberry’s original hotels was gutted by fire. The Hotel Murphy (The Longbranch in later years) was saved because the fire was confined to the upstairs. The damage to the first floor was due to water. The two fires within four months left Newberry with only two available hotels. When you leave water damage untreated, it will only get worse with time. The local water damage restoration company will be able to help you assess the damages and come up with a plan to get your home or office back to normal.

Shortly after the Hotel Murphy fire, construction began on the new three-story brick hotel in the summer of 1914. The Newberry News of June 5, 1914 stated John Shattuck offered to swap properties if Campbell would build his hotel on the Newberry Avenue location. “The proposition met with instant approval on all sides,” the News stated.

Ironically, the site chosen for the new hotel was the location of another devastating hotel fire—the White House, which burned in 1896. The lot remained empty until Campbell acquired it for the new building.

The contract, at a cost of $22,000—excluding the heating system—was given to Herman Gundlach of Houghton. The building was designed by Edward Demar of the Sault.  Construction was completed by early January 1915.

The new establishment was named the Newberry Hotel. To celebrate its grand opening, a large banquet and ball was held at the hotel, with several hundred locals and visitors in attendance.

The business remained with Duncan Campbell until 1942, when it was purchased by Newberry native Bob Sayles. Sayles changed the name to Falls Hotel, a title it still carries today. The name change was prompted by a desire to link Newberry to the popular attraction—the Tahquamenon Falls.