The firearms season of long ago

The Whitetail Deer firearm hunting season has long been a highlight of the year in Michigan. Hunters gear up for the camaraderie of deer camp and the excitement of shooting that prized buck.

And that excitement has been that way forever—or at least as long as local history has been keeping score. 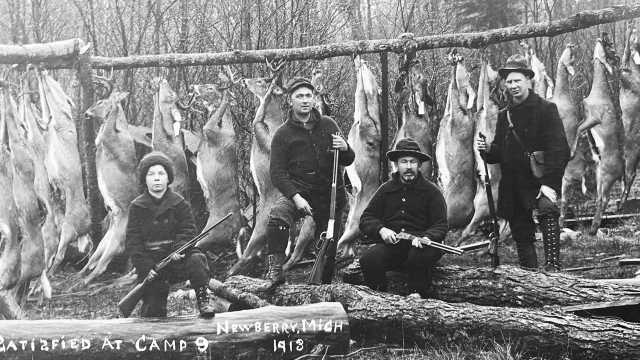 About a week before the opening day of rifle season, the Upper Peninsula would be flooded with hunters from the lower portions of the state and other areas of the country. Hunters dressed in the traditional plaid hunting attire: Red wool jackets, pants, and hats.

The many camps north of Newberry and along the Tahquamenon River would thrum with activity from the hunters who made the long journey north.

The Duluth South Shore and Atlantic Railroad transported thousands of hunters in the late 1880s and early 1900s, until automobiles took on that burden. Passenger trains normally ran a few hours behind schedule during that time of year, and depots were crowded with hunters.

125 years ago, the Newberry News reported, “At the least calculation, about two hundred hunters from the lower part of the state have arrived here and are now located in various parts of the county. They began coming three weeks ago in parties of from five to eight and last week the influx was so great as to delay the trains at Mackinaw City and other points where baggage had to be transferred.”

In 1897, a hunting license cost resident hunters 75 cents; it was $25 for non-residents. Luce County Clerk Perry Leighton kept his courthouse office open late a couple of nights so hunters could purchase licenses.

In the year 1895, the State of Michigan first regulated bag limits to a maximum of 5.

Hunters stayed in tents or abandoned lumber camps, and getting to a particular spot in the woods was not easy in the remote Michigan wilderness. Traditional hunting camps boomed in the late 1930s and especially following WWII.

After cars became affordable to the working class, vehicles lined for miles waiting to take a ferry north over the Mackinac Straits. Weary and hungry hunters waited for hours. (The Mackinac Bridge opened in 1957.)

The same situation occurred at the close of the season when the happy or disappointed hunters again waited in long lines to go home. It was common to see cars with deer tied to the fenders and bumpers.

For the hunters who belonged to the camps along the Tahquamenon River, Captain Joe Beach of the Toonerville Trolley and Riverboat Service took them and their supplies to the camps and kept the river clear of ice during the hunting season.

Beach, originally a State Game Warden stationed at the old McNearny Farm, created the boat service in 1927 to transport visitors to the famous Tahquamenon Falls. He offered his services to the hunters following a break from the busy summer months.

A week before November 15, hunters would arrive to Soo Junction and trolley engineer James “Bucky” Scott made daily trips to Hunter’s Mill to deliver hunters and their supplies to the boat. Beach would also make daily trips back and forth to various camps with his faithful boat the Betty B.

Beach eventually added larger boats to the fleet to accommodate the influx of visitors. But the Betty B remained in service, especially during the hunting season due to its ability to break ice. The Betty B could cut ice up to five inches thick with its solid oak hull covered with heavy gauge steel.

It was sometimes necessary to make three trips a day to keep the river clear during the hunting season.

Beach carried mail and supplies to the hunting camps on those trips. The boat towed a scow to transport the hunters and cargo.

Joe Beach died in 1947, but during his career, he usually accommodated more than 200 hunters a year and in 1928, hauled over 125 deer out of the river camps.

One story covered a lost hunter named Harry Brownell from St. Charles, Michigan. Brownell disappeared on November 9, 1909. A spectacular search took place and was spearheaded by the McMillan Lodge 400 of the Free and Accepted Masons, since the lost hunter was a member of the fraternity. Brownell was not located during the searches.

A few years later, two employees of the Newberry State Hospital found Brownell’s remains a mile and a half from his hunting site. He had probably been shot while sitting on a stump watching a deer runway.

The Village of Newberry was also a busy destination for hunters. For about a week, the Newberry community bustled with activity, which storekeepers had anticipated.

The grocery stores would increase their stock by as much as 30 percent.

Clothing merchants in the downtown section usually sold a fair amount of hunting clothes and gloves. Shoe stores sold a good supply of boots and the restaurants opened early for breakfast. Many of the churches also held special hunter services.

The stores in downtown Newberry would stay open until 9 p.m. the first week of firearm season.

The Falls hotel would not have any vacancy.

Firearm season was probably the busiest and most profitable week the business owners saw during the year, and they were always well prepared for it.