The fall of the Jolly Giant

A giant omelet food challenge at Tovey’s Jolly Inn in Germfask was unbeatable for 11 years.

It launched in 2010, after new owner Damien Tovey purchased the restaurant and thought a food challenge would be fun. 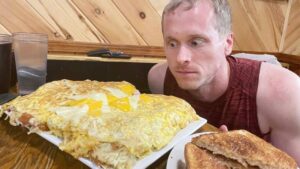 It fell on Saturday, July 24, 2021, when Battle Creek resident Nathan Klein took it on and put it away.

Klein, an engineer by day, is a competitive eater by hobby and one of the best. He’s humble about it, but he’s won more than 100 food eating challenges across the nation, one of about 50 people to reach that record.

On July 24, he tackled the seven-plus pound Jolly Giant, a six-egg omelet with eight squares of cheese on top. The egg and cheese pairing is mostly just a blanket that hides the misery below: ham, bacon, green peppers, onions, and a massive pile of hashbrowns. Three slices of toast are served on the side.

Klein claimed victory over the Jolly Giant in 30 minutes, 33 seconds.

“I did have a shred of doubt when I was eating it,” Klein said. “There were so many hash browns in it.”

“I kept eating it,” he said. “I wondered ‘Is it ever going to look like I’m seeing the bottom of the plate?’ When I first saw it, I thought I had it for sure.”

Klein’s $27.99 omelet dropped to $0 in price, and he won a Tovey’s Jolly Inn hat, which was given to him immediately. His picture will soon go up on a wall inside the restaurant. The restaurant was full by the time he’d finished, and Klein said everyone was very excited.

Klein’s wife, Melissa, and his son and daughter were with him. The family was on a four-day trip through the U.P. to revisit some areas. Nathan and Melissa attended Michigan Technological University and hadn’t been back to the U.P. in four years.

He essentially ate his way through the U.P., completing two omelet challenges in the U.P., including Tovey’s, and another in northern Wisconsin, before returning home. Yes, he won them all. Klein has only ever lost five challenges, and he’s determined to return to those restaurants and beat the challenge in the future.

“I’ve always been a fast eater,” he said. Growing up, he’d eat fast so he could get back to “doing what I wanted to do.”

Klein has made a science out of food competitions. He studies in advance, getting the specs of the challenge. The contents matter, and so does the weight. For a seven-plus pound omelet, he preps the day before with a mealtime intake that weighs at least that much – a combination of food and water.

He calls ahead to make sure the restaurant will serve that dish when he’s there – often around mid day – and, when sour cream is involved, if he can substitute salsa. (If not, he eats the sour cream. The Jolly Giant didn’t have any sour cream.)

For the challenge, Klein studies the food platter when it arrives. Meats need to be eaten when hot, he says, to avoid having to chew them. Everything has to get into his stomach as quickly as possible, with no chewing. When he begins to hit a wall, standing up helps relieve pressure on his stomach, and drinking Diet Coke helps him burp out any filler gases.

Believe it or not, Klein is healthy. He had his doctor verify that – even his cholesterol is acceptable. He is a health and exercise enthusiast, too, and exercises daily – even on food challenge days, and the day after.

After a challenge, he gets tired, not regretful.

His wife, Melissa, thinks he’s “crazy”, he said, but is supportive of his super eating. She and the kids go with him as often as possible, and she takes selfies of herself looking amused or grossed out while he is inhaling food behind her.

Klein posts photos and videos of his challenges on Instagram – @nsklein05 – and YouTube (search Nathan Klein). His video of defeating Tovey’s Jolly Giant will be posted on his YouTube channel on Friday.

Tovey, who designed the challenge, has tried it himself.

“I got three quarters of it down, and then said I’ve got to go to work,” Tovey said.

He wasn’t present when Klein defeated the challenge, but said about 50 people before Klein had tried and failed.

“We’ve had everybody from great big heavyset guys, just off a night’s drinking, who say ‘Oh, I can do that’ to little tiny kids that just want to try it,” Tovey said.