The Berry Patch is under new ownership 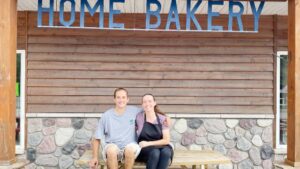 Higley and Borden recently took ownership of the establishment, which is famous locally for its blueberry pies and baked goods.

“We don’t want to change anything really,” Higley said. “We might add to the menu, but everyone is used to what is here.” Baked goods such as the famous blueberry pies and other treats will still be offered out of the bakery display case. Bordon does plan to expand offerings.

Both Dale and Heather live in Marshall, Michigan, but are planning to move permanently to the Paradise area. The pair has family ties to the Upper Peninsula and they love the area.  Dale has family in Manistique, and Heather’s parents were born in the U.P.

“We have a cabin up here by the point,” Higley said. Borden, who has long dreamed of owning a home on Lake Superior, said a friend of hers called to tell her The Berry Patch was for sale, and encouraged her to buy it.

“We decided to make the move,” Higley said.

The pair is planning to make some enhancements inside the restaurant. The area that formerly contained a gift shop will be transformed into a dining area that they’ll keep open later in the evening. They’re also planning to serve ice cream by next summer, and will keep the restaurant open year-round.

The Berry Patch is located right in the heart of downtown Paradise.