The Tally Ho in downtown Curtis is officially reopened, with new owners in charge of the longtime establishment. 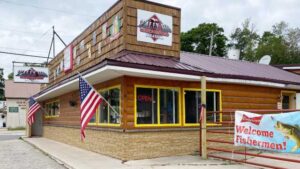 The bar and grill has been a staple of the downtown area for decades and became available to purchase following the death of previous owner Kim Bushey.

Residents Loran and Christa Symonds had wanted to purchase or start a business of some kind for a while now and decided to venture into the bar and restaurant business.

“The Tally Ho has always had good business, so I thought why not,” said Loran, who bought the business from Bushey’s family.

Loran and Christa are now the fifth owners of the business which officially re-opened its doors on June 17.

The bar was closed for the season in November and was not reopened until Loran and Christa decided to buy the business.

The Symonds decided to keep the original name, but they had to change it slightly due to another business in lower Michigan having the same name. “During COVID, we played cornhole in a garage, and we had friends that came over and started calling it the ‘underground garage’,” said Christa. “We brought the name of the garage in with the name of the business.”

The Tally Ho Underground Bar and Grill celebrated their grand opening on June 25, featuring live music and a flag raising ceremony performed by members of the American Legion Post 74 color guard. Loran noted that a group of veterans visiting the area even stopped by to salute during the ceremony. “I was just blown away—that’s what it is all about,” he said.

“I am a veteran, and we are going to take care of our veterans here,” he said. “I am not sure what we will do for them, but we are thinking of something.”

They are planning to add to the liquor license to allow a second service station located outside in the fenced area, which had recently undergone dairy brick repair to prepare for food processing.

“Right now, we can still serve outside, but we either have to send someone out to take orders, or that person has to come in and wait,” Christa said. “We just want to eliminate the extra wait during the busy times of the year.”

They’re also working on the menu.

“We are focusing on quality foods,” Loran explained. They are offering several specialty burgers not offered on a lot of local menus. “One is a brew pub burger on a pretzel bun with onion rings and beer cheese, which is our top selling burger,” Christa said.

The couple also recently ordered a new pizza oven. They will be making changes until the pizza is to their liking, and will offer pizza for dine-in or take-out.

There are cornhole boards in the outdoor dining area, where the couple plan to host cornhole clubs. Live music, DJs, and karaoke will be featured on the weekends, as well as performances by local entertainers.

The Symonds have lived locally for 24 years and feel the support of their friends and family helped greatly in the establishment of their new venture.

“Our kids have made a lot of sacrifices to help us out,” Christa said. They noted that close friends Rob and Angie Doughty, owners of Timber Charlie’s, have also assisted them in their new adventure.

“We are meeting lots of people,” said Christa. “It doesn’t feel like a job when you are having fun.”

In addition to running the bar and restaurant, Christa will continue to drive a school bus for Tahquamenon Area Schools.

The business will remain open year-round and will even provide a bonfire pit for snowmobilers.