After being closed for nearly a year, the Tahqua Journey Drop-in Center of downtown Newberry has officially reopened with new director Robin Spindlow at the helm. 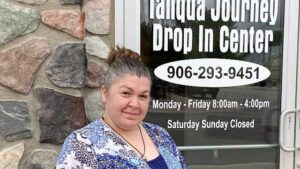 Originally known as Rainbow’s End, the center was reorganized and reopened by former director Lisa Thompson in 2018.  The center offers a venue for adults with mental illnesses to participate in activities and receive encouragement of self-help and mutual support. Tahqua Journey provides its members with a safe and relaxing environment with a wide variety of activities.

The center had temporarily closed its’ doors for nearly a year due to COVID-19 and the lack of a director after Thompson left the position.

On Monday, Spindlow began a week-long meet and greet to re-launch the center. She said she is looking forward to meeting members and getting to know the center.

A former lower Michigan resident, Spindlow moved to Newberry around five years ago with her family.

“We had no friends, no family, we just picked up a moved here,” Spindlow said.

Shortly after relocating to the area, she wondered what the drop-in center was. “I eventually realized it was a place for people to come and share their experiences with mental health,” she explained. “That sparked something in me…I wanted to make sure that people could use their voice with all sorts of things that they have struggled with.”

Spindlow said she realized she could help and applied for the vacant position.

She said to not expect many changes to the center. She has painted and moved some items around to make more of a feeling of home. “We are going to keep the familiarness, but we are going to try to bring more self-help and different programs than what was established before,” she said. “We have different arts and crafts, a library, and pool table.”

Tahqua Journey is founded for adults who suffer with mental illnesses. Membership is open to any person 18 years of age and older who has experienced a mental illness, whether past or present.

During the next couple of weeks, Spindlow hopes to pull in past patrons and build a relationship with her members. She is also hoping to offer health and wellness groups in July, as well as a painting class in the future.

She is very excited about her new position and loves living in the area.

“It’s amazing here—I love it… It’s my safe haven,” she said. “It’s a big change from city life, but I like the pace and wanted to raise my kids in a slower pace.”