The Eastern Upper Peninsula District Pinewood Derby was held on May 21 in at the park in Sault Ste Marie. The Soo Cub Scout pack hosted the event for the top three finishers of local pack derbies. 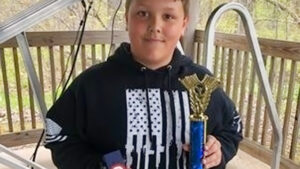 It was a beautiful day to be out and after a fun and exciting event our cubs did well. Brock Feldhusen placed third, Warrick Berry took fourth, and Bradley Hutchinson took sixth in the overall standings. Congratulations on a job well done!

Four Newberry scouts were chosen to be part of the Governor’s Honor Guard and attend the Mackinac Island Scout Service Camp. The scouts joined over 45 other scouts from around the U.P. for two full weekends of intensive training in Escanaba. Island history, flag raising and lowering, marching drills, and various other duties the scouts will be expected to carry out during their week on the island were covered.

The scouts departed from the Starline ferry dock Saturday morning, June 4 and will be on the Island until the morning of June 11. If you have the opportunity to go to Mackinac Island this week, look for our scouts throughout the State Park and Fort sites. They are in charge of daily raising and lowering flags, and will be stationed at various sites all week as park guides as well as carrying out service projects within the park.