An old bell used to note the beginning and end of a school day at the Marks School in Lakefield has returned to Lakefield Township. Although it wasn’t reunited to its original home, the bell has been placed in the belfry of the old Smathers School—presently the Lakefield Township Hall. 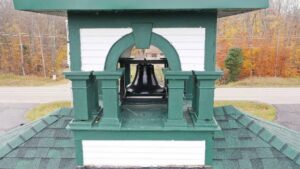 The Marks School was originally built in the 1880s-90s in the Marks Settlement located in East Lakefield. The original building was a one-room hand-hewn log structure. At a later date, a wood frame building was constructed. That schoolhouse is still standing and is now a private residence.

Not much has been recorded about the original Marks school. Despite multiple efforts to learn more, the date of the construction and year the school closed is still unknown at this time.

The bell was recently donated to Lakefield Township by Gary Mark, who is the grandson of early Lakefield resident Wesley Mark.

After the school closed, the bell ended up on the Mark farm. Gary bought the family farm after his Uncle Wes was no longer was able to maintain it. The bell has traveled with Gary and his family ever since he sold the farm.

Gary’s wife, Pat, was talking with Jean Foley about the Marks School and told Foley they still had the original bell.

“I thought it would be a great addition to the township hall,” Foley said. “My dad, siblings and cousins all attended the Marks and Smathers  School, and I even had an aunt teach at the Marks.”

The original Smathers School bell was removed years ago, and is no longer with the township.  The addition of the restored  bell to the hall adds to the nostalgic feel of an old country school.