After a two-year break due to COVID-19, the U.P. Open chess tournament took place August 20-21 at Bay Mills Community College in Brimley. 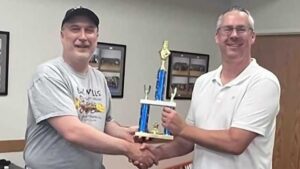 The event was organized by Sawaski, but directed by National Master Tony Nichols, which allowed Sawaski the chance to participate in the tournament.

Grand Rapids resident and National Master Eric Fischvogt won the Open Tournament with a perfect score of 4.0. Sawaski came in second with a score of 3.0.

The championship title is awarded to the highest performing resident of the U.P., making this the 7th championship for Sawaski.

“The tournament is kind of my life,” said Sawaski. “I have been competing for this since 1984, when I was a kid. I was a runner up to it about seven times before I finally won my first title in 1997.”

Behind Sawaski in this year’s tournament was Glenn Schmiege of Sugar Island and Steve Soltys of Sault Ste. Marie, Mi.

Sawaski, who is the main organizer of the U.P. Open, is a college math professor at Bay Mills Community College. He has also recently been instrumental in the construction of a chess pavilion with chess tables on the college campus.

Sawaski had previously served as a GED math professor at Newberry Correctional Facility from 1996-2016.

He also serves as the northern representative of the MCA board.

Sawaski, who first started playing chess at the age of seven, has loved the game ever since. He was also a member of the distinguished Escanaba Area High School chess program.

In 2007, he won the Electronic Knights Chess Championship, a national tournament also known as the U.S. Open Correspondence Championship.

Correspondence chess has the same rules as if the players was sitting at the board, but moves are transmitted by email, webserver, or postcard.

A traditional tournament level game takes about four hours to complete, but correspondence chess can take months or years.

When he was the State Amateur Champion, he stopped playing chess for a while to give fellow players a chance to win. He said he will continue to play for 10 or 15 more years, but will compete in the U.P. Open even after his professional days are over.

“This tournament is the heart and soul of U.P. chess and I am happy to have been at the top for so long and so many times,” he said.