Ann McFadden’s third grade class has just launched a huge project: They’re responsible for feeding and tending 125 Chinook salmon eggs for their Salmon in the Classroom project. The Michigan Department of Natural Resources-based program entrusts the eggs to equipped classrooms to promote a love for Michigan’s natural resources. 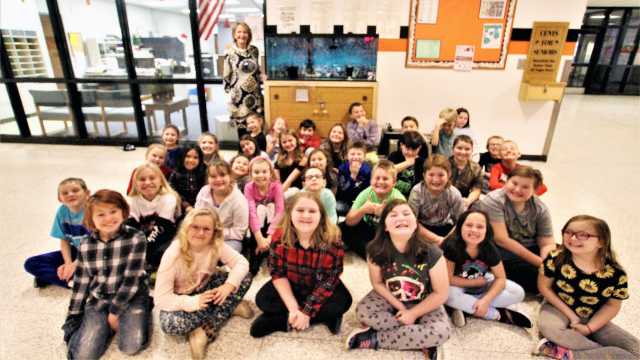 On November 29, 2022, 125 salmon eggs were placed in a specially designed aquarium inside the school. The eggs haven’t hatched yet, but her students eagerly shared how they are starting to develop their eyes and spine. The eggs are expected to hatch with attached yolk sacs just before Christmas. Feeding won’t start until mid-January, when the yolk has been absorbed and the fish are strong enough to swim in the mid-column of the tank.

The third graders will take turns feeding them, but all elementary classes will eventually get a chance to participate.

“The middle school and high school students will also be involved,” McFadden said. “They will come down and help with the water chemistry to ensure the water quality is where it needs to be.” It is both a fun and educational project that the entire school can be involved in and allows the kids to learn more about the life cycle of fish and invasive species as well as learning about the Great Lakes water system.”

The salmon will be released in May into the Tahquamenon River near Paradise, Michigan. A representative from the DNR will be on hand for the event, where students will also enjoy a cookout and spending some time outdoors.

It’s the second year McFadden’s class has taken on the project. The idea came after McFadden heard about this same project being conducted by the Whitefish Township schools in Paradise. “I started doing some research on the idea and knew I wanted to pursue it,” she said. “Last year we had to raise over $4,000 to purchase the state-of-the-art equipment necessary for the project.”

McFadden picked up the eggs from the Marquette State fish hatchery and in doing so was required to meet the Department of Natural Resources protocol by obtaining a “Scientific Collectors Permit.” This special provision allows McFadden to possess the eggs and fingerlings for a special student research project.

The Chinook salmon will reside in a 75-gallon tank in the lobby of the elementary school. The tank runs with efficiency with the help of a top-of-the-line chiller that keeps the water at 52 degrees. The tank hosts canister filters and sponge filters to ensure aquatic success. Last year, TAS teacher Linus Parr had his students build a beautiful cabinet to hold the aquarium, which is still in use.

A beautiful plaque created by Howard Bliss mounted over the aquarium to recognize the donors from last year. More names will eventually be added as the project grows and more donors will be necessary to sustain it.

“I think the reason we are having more success is I am kind of a DNR guinea pig this year, and we are trying a new protocol for getting the tank to cycle, creating a healthier environment for them,” McFadden said.

If you are interested in contributing to the Salmon in the Classroom project to ensure its future, contact Ann McFadden at the school.