Somewhere I heard the adage, “Nothing good happens fast”, so we are pleased to announce what would appear to be a VERY GOOD project for our school, our township, and our visitors. The 2021-2022 Earth Science class installed their interpretive panels along the South Loop of the Paradise Pathways and at both trailheads for the North and South Loop on Thursday, November 3. 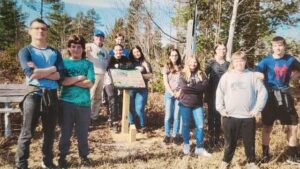 This was the culmination of more than a year of working with the good folks from the Michigan Department of Natural Resources, the Department of Agriculture Forest Management Division, the Central Invasive Species Management Area (CISMA), the Chippewa/Luce/Mackinac Conservation District, Freshwater Research at Lake Superior State University, and the Tahquamenon Country Pathways Association (TCPA), to produce a series of interpretive panels for the 1.6-mile South Loop Trail.

This started for our kids with a snowy snowshoe reconnoiter of the South Loop last fall under the leadership of DNR Interpretive Specialist Theresa Neal to decide which areas would be featured.

The initial focus of the project was to have a sign to warn trail users of the danger of inadvertently spreading invasive species of plants by carrying seeds or spores in their boot or shoe treads. This objective was then expanded by placing a brush/scraper at the base of the sign so users could easily clean their own boots or shoes while reading about the two most prevalent invaders: spotted knapweed and garlic mustard.

Then the project went further to allow students to explore the natural beauty that deserves protection as a source of recreation and enjoyment of our Northwoods environment. The project also included the logging history of the Tahquamenon area and how the surrounding state forest lands are being managed to insure the health and future of the northern forests.

Back in class, the students began doing research, finding photographs (some of which were actually taken by the students themselves) and writing the “copy” for their six selected interpretation subjects. Major funding for the project came from grants from CISMA, CLM Conservation District, and Township Community Schools. As the students worked, DNR Interpretation Specialist Theresa Neal came to work with them individually. She helped them craft signs that would be informative yet concise (who goes on a hike to read a lot?) and visually pleasant.

Ms. Neal helped greatly in the final composition of the signs and provided a fabrication source for actual production. The signs themselves are a “state of the art” lamination in heavy duty frames. They should last 25 or more years, even in our environment.

After final grants and funds were acquired, sign production took place this summer and the frames arrived in late October.

In preparation for the actual installation of the signs, the 11th-grade Civics class helped get the posts in the ground and ready for the signs to be installed. The Civics class includes Jacob Davidson, Hunter Dunlap, Landen Harding, Thayne Krupski, and Greg Mills. They hauled the 4x4s out there, dug the holes manually, and drilled the mounting holes for installation.

Five of the signs are placed on the South Loop, with one installed at the Trailhead for the North Loop Trail of the Paradise Pathways.
On Thursday, November 3, the Earth Science classes made their way out to the trail to place their signs along the South Loop on a beautiful fall afternoon.

The first placement was at the South Loop Trailhead. It advises hikers to clean their boots and informs them about the two most invasive species in the area. An identical sign was also placed at the North Loop Trailhead, along with another boot brush designed and built by class members.

The natural beauty of the Paradise forest was extolled in the next sign, which informs about two of the delicate endangered species that grow along the trail. Trailing arbutus and pink lady slippers are wonderful wildflowers that can be seen nestled on the forest floor.

A little further down the trail, a sign about logging and the development and management of Michigan’s forests greets hikers.
Up on the ridge of the trail, a wildlife sign teaches a little about the creatures that may be observed from the trail.

Near the east end of the ridge, a sign explains the environment of the “old growth forest”, which has stood the test of time and offers habitat for many woodland creatures.

The students were pleased and proud of the interpretive signs they created and installed along the South Loop Trail and at the North Loop Trailhead.

Both the North and South Loops of the Paradise Pathways are maintained and groomed by members of the TCPA for four-season enjoyment of the silent sports.

The hope of the students and grantors is that this project will increase the use and appreciation of the trails by residents and visitors, and provide an enhanced experience of our beautiful Tahquamenon country.